The Motorola Moto G Power (2021), as the name suggests, is a battery-centric budget smartphone from Motorola. The phone was first announced on the 8th of January 2021 and released on the 14th of January 2021. It is a successor to the previous year’s Motorola Moto G Power, which was launched on the 17th of April 2020. The biggest advantage of owning this smartphone is its battery. The phone has a 5000 mAh lithium polymer non-removable battery that supports 15W fast charging. While Motorola claims it can last up to 3 days on a complete charge, expect it to easily last for close to 1.5 days.

The device has a USB Type-C 2.0 port for charging. In the communication department, the device has GPS, Bluetooth 5.0, Dual-band Wi-Fi, Hotspot, and Wi-Fi Direct. While you can listen to FM Radio on this phone, the device lacks support for NFC. This is expected as most budget phones usually lack NFC. Besides the battery, what’s also impressive about the phone is its price. The phone comes at a starting price of $199. There are two variants of the Motorola Moto G Power (2021). The base variant has 3 GB of RAM with 32 GB ROM, while the other variant has 4 GB of RAM with 64 GB ROM.

The memory type used here is eMMC 5.1 and not UFS, which is a letdown. On the positive side of things, the phone’s memory can be expanded by inserting an SD card. Unlike most budget phones, the phone has room for just a single Nano-SIM that can handle 2G to 4G connections. For colors, there are a couple of options once again, which are Flash Gray and Polar Silver. The build quality of the Motorola Moto G Power (2021) is decent, as it has a plastic body with a water-repellent coating. The phone is 6.51 inches tall, 2.99 inches wide, and 0.37 inches thick. The device may feel heavy as it weighs 206.5 grams.

The phone’s display quality and the multimedia experience are average, at best. The Motorola Moto G Power (2021) has a 6.6 inches HD+ IPS LCD screen. While the phone does have a screen-to-body ratio of 83.8%, its PPI density is just 266. On the bright side of things, the device has a loudspeaker and a 3.5 mm headphone jack. The performance delivered by the phone is good as it uses the popular Snapdragon 662 processor. The gaming performance, on the other hand, is handled by the Adreno 610 GPU. On the software side, the device runs Android 10 out of the box and will receive an Android 11 update, besides two years of security updates. The phone provides a clean, near-stock Android experience, as you would expect from Motorola. The phone scored 168000 points in the AnTuTu benchmark test.

When it comes to cameras, the Motorola Moto G Power (2021) turns in, an ordinary performance. The phone has a triple camera set-up on the back. It has a 48 MP wide-angle, 2 MP macro, and a 2 MP depth sensor camera. The camera not only has features like LED flash, HDR, and panorama but also gyro-EIS. On the front, the device has an 8 MP camera for selfies. As for video recording, both the front camera and the rear camera set-up can do so in 1080p. As for sensors, the device has a side-mounted fingerprint sensor, accelerometer, gyro, proximity, compass, and barometer. 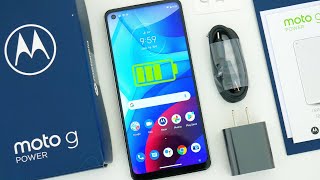 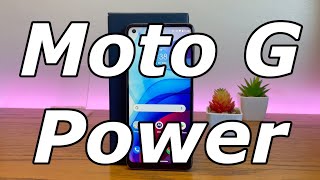