If you are looking for a new mid-range stylus phone, the Motorola Moto G Stylus (2022) is certainly an option. Like everything, it does come with its share of pros and cons. The phone was first announced on the 3rd of February 2022 and released two weeks later on the 17th. The phone comes in a single configuration of 6 GB of RAM and 128 GB of internal storage, which is priced at $299. On the bright side, the phone supports an SD card. However, it can only accommodate a single Nano SIM card and connections from 2G to 4G.

These days, we rarely see phones with single SIM support. This can be looked upon as a downside of this device. The lack of 5G connectivity is another. For colors, there are two options, Twilight Blue and Metallic Rose. One of the unique advantages of owning this phone is that the phone has a stylus. The stylus makes tasks like taking notes and editing photos efficient and enjoyable. The phone has a good build quality, but it does feel heavy at 216 grams. On the positive side, Motorola Moto G Stylus (2022) has a water-repellent coating.

Coming to the dimensions, the phone measures 6.70 by 2.99 by 0.37 inches. The other great advantage of owning this phone is that it has a 5000 mAh lithium polymer non-removable battery that supports 10W charging. While the phone’s charging time will certainly be longer than most of its competitors, its battery backup is great. If you are an average user, the phone should last you for more than one and a half days. The phone has a 6.8-inch FHD+ IPS LCD screen whose resolution is 1080 × 2460 pixels.

Besides, the phone has a screen-to-body ratio and PPI (pixels per inch) density of 84.6% and 396 respectively. The phone’s multimedia experience is decent, but it could have been better. Motorola Moto G Stylus (2022) lacks stereo speakers, but that’s not the case with a 3.5 mm headphone jack. On the software side of things, the device runs Android 11. It is also free from bloatware, which is expected from a Motorola device. The performance delivered by the MediaTek Helio G88 is okay. Considering the price, Motorola should have used a better processor.

The Motorola Moto G Stylus (2022) uses the Mali-G52 MC2 GPU for handling your gaming requirements. The presence of the 90 Hz screen refresh rate does improve the experience. As for the sensors, the phone has an accelerometer, gyro, proximity, and a side-mounted fingerprint sensor. Coming to cameras, the performance is superb. On the back, the phone features a triple camera setup. It has a 50 MP wide-angle, 8 MP ultrawide, and 2 MP depth sensor camera. For selfies, the phone features a 16 MP wide-angle camera. 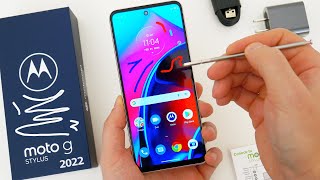 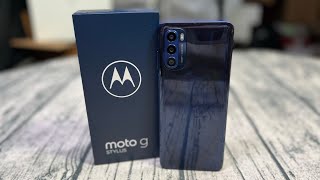