If you are looking for an affordable 5G stylus smartphone, you should definitely consider the Motorola Moto G Stylus 5G. The stylus is fully rounded so that it is easy to use and insert into the back of the phone. For added convenience, there is a push button to lock and release the stylus. Taking notes with the stylus is a pleasing experience, too. The phone’s biggest highlight, as has often been the case with G series smartphones of late, is the battery backup. The phone has a 5000 mAh lithium polymer non-removable battery. As long as you are an average user, you should get more than 1.5 days of use out of it on a complete charge.

The device supports 10W charging, and it would have certainly been better if the phone came had faster-charging capabilities. For charging, the Motorola Moto G Stylus 5G uses USB Type-C 2.0. In the communication department, the phone has GPS, Bluetooth, Wi-Fi dual-band, Wi-Fi Direct, and Hotspot. The lack of NFC support is a downside of owning this phone, as it’s usually present in most mid-range phones. You won’t have issues with the build quality as the phone is sturdy, but you might have issues with its size and weight. For reference, the device measures 6.67 by 3.05 by 0.37 inches and weighs 217.5 grams.

While the device does have a plastic frame and back, it also has a water-repellent design. The phone has a great look but easily attracts fingerprints. Therefore, it’s better to use it with a case. For color, there is only one option, Cosmic Emerald. Speaking of ones, the device has room for only one Nano-SIM card but can handle connections from 2G to 5G. The Motorola Moto G Stylus 5G comes in two configurations. You can choose between a 4 GB RAM with 128 GB ROM variant and a 6 GB RAM with 256 GB ROM variant. In case you want more storage, you can use an SD card. The device comes at a starting price of $399, placing it in the category of affordable mid-range smartphones.

When it comes to performance, the Qualcomm SM4350 Snapdragon 480 5G processor does a reasonable job. Gaming on the Motorola Moto G Stylus 5G is handled by the Adreno 619 GPU. Coming to the software, the phone runs Android 11 and will receive an update to Android 12 in the future. In addition, it will get security updates for a couple of years. This can be looked upon as an advantage of owning the device. As for the sensors, the device has an accelerometer, gyro, proximity, and rear-mounted fingerprint sensor.

The phone offers a decent multimedia experience but nothing spectacular. The phone has a 6.8-inch FHD+ IPS LCD screen with an aspect ratio of 20:9. Besides, the screen-to-body ratio and PPI density are 85% and 387 respectively. The camera performance, on the other hand, won’t make a great impression on you. The device has a loudspeaker and a 3.5 mm headphone that undoubtedly adds to the experience.

The phone has a 48 MP wide-angle, 8 MP ultrawide, 5 MP macro, and 2 MP depth sensor camera on the rear. For selfies, the Motorola Moto G Stylus 5G has a 16 MP wide-angle camera. The smartphone’s camera features include LED flash, HDR, and panorama. On the subject of video recording, both front camera and rear camera setup can record videos in 1080p@30 fps. However, only the rear camera setup can take 1080p videos at 60 fps. 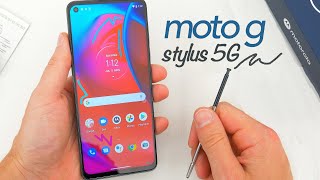 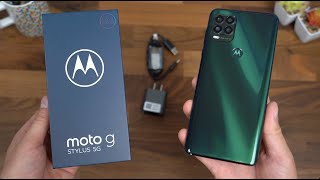