Motorola Moto G100, which is a mid-range smartphone from Motorola, was first announced on the 25th of March 2021. The phone was released on the 15th of April 2021, 20 days after its announcement. However, this isn’t just another mid-range smartphone from the band. The reason lies in the “Ready For” software that allows you to do several interesting things with this phone. For instance, you can connect it to a TV or monitor wirelessly or through the HDMI cable supplied in the box. Moreover, you can attend video calls or play mobile games. The phone has a starting price of $449.

Motorola Moto G100 comes in two configurations. The base variant has 8 GB of RAM with 128 GB of internal storage, while the other variant has 12 GB RAM with 256 GB ROM. The RAM and memory type used here is LPDDR5 and UFS 3.1 respectively. The color options are Iridescent Sky, Iridescent Ocean, and Slate Grey. While you can expand the phone’s memory, it only comes with a hybrid slot. Speaking of slots, the phone can support up to two Nano-SIM cards and connectivity from 2G to 5G. The phone measures 6.63, 2.91, and 0.38 inches in height, width, and thickness.

This smartphone weighs 207 grams, which definitely falls on the heavier side. The phone is big and using it with one hand is difficult. This is one of the rare cons of owning the Motorola Moto G100. The build quality is solid as it has a water-repellent design with an anti-fingerprint coating. The phone has a 6.7-inch FHD+ IPS LCD screen whose aspect ratio is 21:9. The phone supports HDR10 and can go up to 560 nits of brightness. Going by the specs and knowing what we know, we can safely say the multimedia experience of this phone is great. Speaking of which, the device does have a loudspeaker and a 3.5 mm headphone jack.

However, at this price point, Motorola should have provided stereo speakers. What Motorola has done right, though, is they have added a brilliant processor, namely Qualcomm SM8250-AC Snapdragon 870 5G. The Adreno 650 GPU handles the gaming and graphic requirements of the phone. The Motorola Moto G100 scored 663633 points in the AnTuTu benchmark test. On the software end, the Motorola Moto G100 runs Android 11 out of the box. The phone is great in the camera department as well.

This smartphone has a quad-camera setup on the back. It consists of a 64 MP wide-angle camera, a 16 MP ultrawide camera, a 2 MP depth sensor camera, and a ToF (Time-of-flight) camera. Apart from the usual camera features like panorama and HDR, the device also possesses a Dual-LED flash and ring flash in macro mode. On the front, the device has a 16 MP wide-angle camera and an 8 MP ultrawide camera. When it comes to video recording, the Motorola Moto G100 can do so in 1080p, 4K, and 6K. Coming to sensors, the phone has a side-mounted fingerprint sensor, accelerometer, gyro, proximity, and compass.

For communication, the device uses dual-band, Wi-Fi Direct, hotspot, Bluetooth 5.1, and GPS. It lacks a radio but supports NFC, which is often the case with mid-range phones. Furthermore, the Motorola Moto G100 has USB Type-C 3.1 and USB On-The-Go. The battery backup of this phone is amazing — it easily lasts a day and a half on a full charge, provided you’re an average user. The device supports 20W fast charging but lacks the reverse charging feature, which is a let-down. 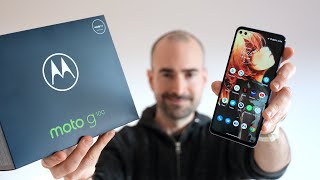 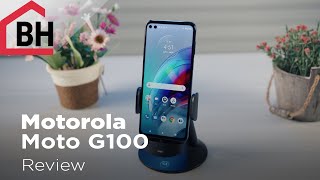