Motorola Moto G40 Fusion is a great option for those looking for a phone that offers a near-stock Android experience. However, there is a lot more to the phone than just its clean software. The device runs Android 11 out of the box, and it will also get an Android 12 update in the future. In addition, it will also receive 2 years of security updates. After software, the phone’s biggest upside is its overall performance. The Qualcomm SM7150 Snapdragon 732G processor delivers a superb performance.

The Adreno 618 GPU, on the other hand, looks after the phone’s gaming requirements, which is supported by the 120 Hz screen refresh rate. In the AnTuTu benchmark test, the phone has a score of 241808 points. The build quality of the Motorola Moto G40 Fusion is a mixed bag. The phone, while strong and durable, is quite heavy at 225 grams. On the bright side, the phone has a water-repellent design, which improves the appeal of the device. Coming to the dimensions, the phone measures 6.68 by 2.99 by 0.38 inches.

The Motorola Moto G40 Fusion has a 6.8-inch FHD+ IPS LCD screen and a screen-to-body ratio of 85.3%. The phone not only has a PPI density of 395 but also supports HDR10. Looking at the specs, it’s safe to say the device delivers a good multimedia experience. On that subject, it’s also worth mentioning here, the device has a loudspeaker and a 3.5 mm headphone jack. Coming to the sensors, the device has a rear-mounted fingerprint sensor, accelerometer, gyro, and proximity sensor.

The phone’s camera performance is pretty good in natural lighting, but not in artificial lighting conditions. The device has a triple camera set-up on the rear. It has a 64 MP wide-angle, 8 MP ultrawide, and 2 MP depth sensor camera. The phone’s camera features include LED flash, HDR, and panorama. On the front, Motorola Moto G40 Fusion features a 16 MP wide-angle camera for selfies. When it comes to video recording, both the rear camera set-up and the selfie camera can do so in 1080p and 4K.

In the communication department, the device has a Wi-Fi dual-band, Wi-Fi Direct, hotspot, Bluetooth 5.0, USB On-The-Go, and GPS. The device not only has FM Radio but also supports NFC, which is usually absent in budget mid-range devices. For charging, Motorola Moto G40 Fusion uses USB Type-C 2.0. Speaking of charging, the device supports 20W fast charging and Quick Charge 4. The phone has a massive 6000 mAh lithium polymer non-removable battery.

On average use, the phone should provide a battery backup of around two days, which is impressive. One could argue Motorola should have provided faster charging on the specs sheet, but the battery backup erases those concerns by making up for it. The phone comes at a starting price of around €180, which approximately converts to $200. It also comes in Dynamic Gray and Frosted Champagne colors and has two variants. The base variant has 4 GB of RAM and 64 GB of internal storage, while the premium variant has 6 GB of RAM and 128 GB of ROM.

The internal memory can be expanded using an SD card, but the device has a hybrid card slot. Therefore, you can’t use an SD card and two SIM cards at the same time. The lack of a dedicated card slot can be considered as a disadvantage of owning a Motorola Moto G40 Fusion. The device can support up to two Nano-SIM cards and connections from 2G to 4G. 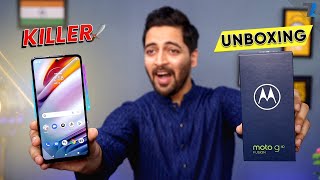 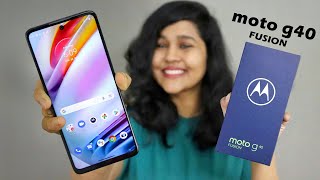