Motorola Moto G51 5G falls under the budget mid-range category and is a good value-for-money phone. The device is another example of how well Motorola has been doing in budget and mid-range categories. The phone was first announced on the 3rd of November 2021 and released on the 16th of December 2021. As you might have guessed, the phone’s biggest advantages are its affordability and 5G connectivity. The phone comes at a starting price of $435 and in three colors: Indigo Blue, Bright Silver, and Aqua Blue.

Staying on the software side of things, it should be mentioned that the device runs Android 11. The Qualcomm SM4350-AC Snapdragon 480+ 5G delivers a solid performance. The gaming performance delivered by the Adreno 619 GPU isn’t that great, though. On the positive side, Motorola Moto G51 5G has a 120 Hz screen refresh rate. In the AnTuTu benchmark test, the phone has a score of 242567 points. It has a 6.8-inch FHD+ IPS LCD screen with an aspect ratio of 20:9. Also, the phone has a screen-to-body ratio of 85.6% and a PPI (pixels per inch) density of 387.

In the sound department, the device has a loudspeaker and 3.5 mm headphone jack but lacks stereo speakers. The phone’s multimedia experience is good, but it could have been better. One of the few cons of the device is that the device feels a bit heavy at 208 grams. Coming to the dimensions, the phone measures 6.71 by 3.01 by 0.36 inches. The phone attracts fingerprints easily, but it has a water-repellent design, which is nice to see. As for the sensors, the device has an accelerometer, gyro, proximity, and compass.

For communication, the device uses a Wi-Fi dual-band, Wi-Fi Direct, hotspot, Bluetooth 5.1, and GPS. The smartphone not only has NFC but also FM Radio, which isn’t very common in mid-range phones. Charging is another area where Motorola Moto G51 5G doesn’t meet expectations. The phone only supports 10W charging, at a time when you even see budget phones come with 18W fast charging. It has a 5000 mAh Li-Po non-removable battery, and the juice comes through the USB Type-C 2.0 port.

After a complete charge, the phone should last for one and a half days, on average use. As for the cameras, the phone performs fine, but that isn’t the case in low lighting conditions. On the rear, the phone has a 50 MP wide-angle, 8 MP ultrawide, and 2 MP macro-sensor camera. For selfies, Motorola Moto G51 5G features a 13 MP wide-angle camera. Its camera features include LED flash, HDR, and panorama. As for video recording, the selfie camera can record in 1080p@30fps. In comparison, the rear-camera set-up can record videos in 1080 at 30, 60, and 240fps. 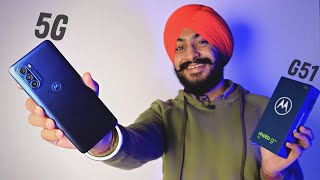 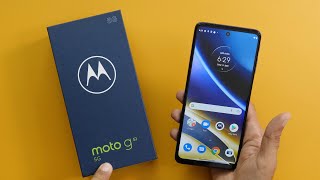