Motorola has been doing some great work in the mid-range category, and Motorola Moto G71 5G is no different. The phone was first announced on the 18th of November 2021 and released two months later on the 19th of January 2022. The smartphone comes at a starting price of $255, and has two distinct variants on the market. However, both have 128 GB of internal storage with 6 GB and 8 GB of RAM, respectively. There’s no option to extend the phone’s storage, which is a major con of this phone.

It would have certainly been better if the premium variant had 256 GB of internal storage. In terms of connections, the device can support 2G, 3G, 4G, and 5G. For colors, there are three options namely, Neptune Green, Arctic Blue, and Iron Black. One of the biggest upsides of this phone is that it offers a near-stock Android experience. However, it does come with a few unnecessary pre-installed apps, which can be uninstalled. On the software side of things, Motorola Moto G71 5G runs Android 11. The Qualcomm SM6375 Snapdragon 695 5G processor delivers a solid performance.

The gaming experience is handled by the Adreno 619 GPU. The phone’s build quality is pretty great despite its plastic body. The Motorola Moto G71 5G device has a water-repellent design and weighs 179 grams. It’s easily one of the lightest phones in the mid-range category. Coming to the dimensions, it measures 6.35, 2.91, and 0.33 inches in height, width, and thickness. The phone has a 6.4-inch FHD+ AMOLED screen, which can go up to 700 nits of brightness. Its screen-to-body ratio of 83% is less than ideal, but its PPI (pixels per inch) density of 441 is impressive.

The multimedia experience should be nice here. While the device has a 3.5 mm headphone jack and loudspeaker, it lacks stereo speakers. For sensors, the device has an accelerometer, gyro, proximity, and a rear-mounted fingerprint sensor. The absence of a side-mounted fingerprint sensor might be a con of this device to some people. In the communication department, the device has a Wi-Fi dual-band, Wi-Fi Direct, hotspot, Bluetooth 5.0, GPS, and USB On-The-Go. The phone not only has NFC but FM Radio as well, which is often missing in mid-range phones.

The Motorola Moto G71 5G smart device uses a USB Type-C 2.0 port for charging. It has a 5000 mAh lithium polymer non-removable battery that supports 33W fast charging. Its battery backup is quite good, as you would be able to get around 1.5 days out of it on average use. If the ads are to be believed, the device should go from 0 to 50% charge in just 30 minutes.

Coming to the cameras, the phone’s overall performance is decent, but not in low light conditions. On the rear, the phone has a 50 MP wide-angle, 8 MP ultrawide, and 2 MP macro sensor camera. The phone’s camera features include LED flash, HDR, and panorama and can record in 1080p@30/60fps. For selfies, the Motorola Moto G71 5G smartphone uses a 16 MP wide-angle camera. The selfie camera can also record in 1080p@30fps. 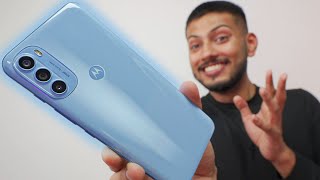 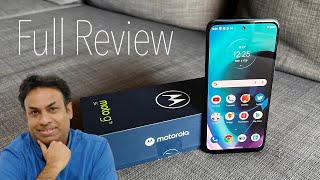