Motorola Moto X4 launched not long ago, with an etiquette of a mid-range, affordable smartphone, stuck in between a flagship and a budget device. It didn’t show a huge bump in upgrades compared to its relatives Motorola G5 and G5Plus. We wouldn’t be honest if we didn’t admit a few things changed along the way. If you’re not looking for a top-end flagship Motorola phone like Motorola Z2, then keep reading. You just might find a new thing to adore over. Let us delve through Motorola Moto X4 specifications one by one.

The first thing you’ll notice when you hold it in your hands is the sleek, long look and a beautifully done Sterling Blue color if you’ve chosen that model. It just looks premium and shiny, and quite unique. It fits in your hand really comfortably and it has a glossy look to it. We can thank both front and back glass and an aluminum frame for that. It uses an IP68 certified system of dust and waterproofing, in case you like long walks while it’s raining. Maybe you’ve got an affinity of being clumsy when you least expect it. Don’t worry, Corning Gorilla Glass native glass protection will protect you in case of scratching. Another thing that’ll catch your eye is certainly one of the best Motorola Moto X4 features – its camera.

It sports an 12 MP dual-camera on the back, allowing you to take more quality pictures with a fast shutter speed. Even bigger resolution camera is on the front – 16 MP for that perfect nature selfie. Motorola Moto X4 has a combined dual LED flash integrated, so if you’re scared of not being able to take pictures of that perfect night out with your friends – don’t fret. Facial recognition is also present in this model, but if you’re looking for a phone to really stand out, prepare to hear this:

For only 399$, which is the price of Motorola Moto X4, you get to be a proud owner of a smartphone that comes with Android 7.1 built-in. It is the first non-Google Android One phone that can use Google’s Project Fi mobile network. You get all the security updates and a 2-year enjoyment of operating system upgrades. Now let’s get to the screen you’ll be staring at often – 5,2-inch screen with full HD resolution of 1080 x 1920 pixels. The resolution fits the size nicely, and an LTPS IPS panel technology follows the winning formula. A battery on the first glance can be a reason to worry, but it a perfect fit for the size of the screen. You will go a full day without problems, but if you run into any, there’s a Fast Charge feature integrated.

Motorola Moto X4 has shown to fill about 54% of battery in only 30 minutes! Before we finish our journey discovering this beauty of a phone, let’s mention Motorola Moto X4’s main feature. That’s a great combination of mid-range Octa-core Qualcomm Snapdragon 630 processor and an Adreno 508 GPU. You’ll be playing some less demanding games without a hitch, but don’t expect miracles. It only has 3GB of RAM which isn’t starting to be a red flag yet, though. In case you’re a fan of top-end gaming, you might want to save up some money. If that’s the case, go for a better model in Motorola’s own line, or choose a different phone altogether. 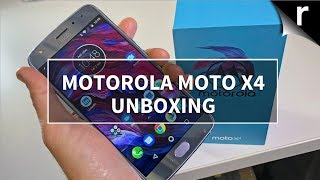 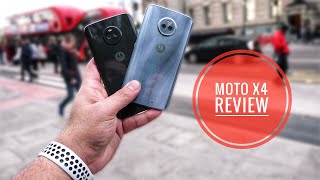