Motorola Moto Z2 Force is Motorola’s reply to the world of flagship smartphones today. It’s a great competitor in some aspects, and we’ll see in just which of those Motorola shines. At the first glance, you’ll notice Motorola having a familiar look to it. That’s because they made the phone as a unibody, and out of aluminum. The phone is slim, which made Motorola sacrifice battery capacity, and it only possesses 2730 mAh. We can say with certainty, it is quite low for a flagship today. Let’s take a look at the other Motorola Moto Z2 Force specifications:

The first thing we have to mention right off the bat, and which might be a deal breaker for you – it has no 3,5mm headphone jack! They tried to make up for it by including a USB-C to 3,5mm adapter with the package. Considering people were already displeased with iPhone’s decision, they will probably put Motorola on the pyre the same way. They made up for it by their technology called ”Shatterproof” which is as the name suggests – supposed to protect your display from cracking or breaking. We’ve heard of similar technologies, the best known being Corning Gorilla Glass, so this isn’t anything extremely revolutionary.

As a matter of fact, let’s take a moment to mention Motorola Moto Z2 Force features that are visible from the start – the screen. It boasts a 5,5-inch P-OLED panel screen with a resolution of 1440 x 2560 pixels and ratio of 16:9. This will assure you that you’ll be looking at a razor-sharp screen and vivid, bright colors during your day-to-day use. With Motorola Moto Z2 Force price being about 800$ you’ll get a stock Android 7.1.1 Nougat experience. You will have a low amount of bloatware and unnecessary apps to endure while scrolling through menu and navigation. Also, you always have an ability to upgrade to Android 8.0 Oreo if that’s what you like best.

Motorola Moto Z2 Force is equipped with the top-notch Octa-core (4×2.35 GHz Kryo & 4×1.9 GHz Kryo) Snapdragon 835 processor. The combination with Adreno 540 is standard. It is a definitive flagship from Motorola to anyone doubting whether it’ll run the most demanding games and apps. Motorola Moto Z2 Force ships in two versions of internal storage and RAM – 4GB with 64GB internal memory, or 6GB and 128GB memory for you to use. What’s best – it’s up to you to choose! The fingerprint sensor is front-mounted to eradicate writing long and boring codes.

Furthermore, Motorola Moto Z2 Force sports a dual 12 MP camera on the back, allowing you to take quality pictures. Whether you’re going out for a drink or having a little personal time in nature, you can have it all. Additionally, you will use another camera feature – selective focus, reminiscent of something similar coming from Samsung. You can use a Pro mode to completely customize your camera shutter speed, exposure, white balance and other functions. The video quality Motorola Moto Z2 Force brings is astonishing as well, promising to provide these qualities: 2160p at 30fps, 1080p at 30/60/120fps and 720p at incredible 240fps. 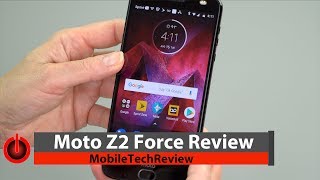 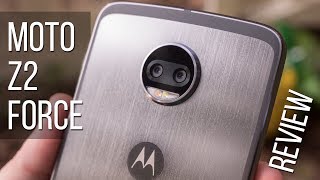