On the 14th of January 2021, Motorola launched the Motorola One 5G Ace, whose biggest strength is its battery life. The phone has a 5000 mAh lithium polymer non-removable battery that supports 15W fast charging. On average use, the phone should easily last for close to two days. However, it would have been better if the phone had higher charging capabilities. For charging, the phone has a USB Type-C 2.0 port. In the communication department, the device has GPS, Bluetooth 5.1, Hotspot, Wi-Fi dual-band, and Wi-Fi Direct. The device also has support for NFC, which is nice to see.

Speaking of support, the device has HDR10 support, which improves your multimedia experience. The device has a 6.7 inches IPS LCD screen with an aspect ratio of 20:9. In addition, the phone has a screen-to-body ratio of 85.7% and an impressive PPI density of 393. The Motorola One 5G Ace is pretty bright as well, so you will have no issue using the phone outdoors. While the phone does offer a pleasant multimedia experience, it may not attract everyone due to its size and weight. The phone measures 6.54, 3, and 0.39 inches in height, width, and thickness and 212 grams in weight. The phone has a loudspeaker and a 3.5 mm headphone jack, so you don’t need to spend on Bluetooth earphones.

For color, there are two options, Volcanic Gray and Frosted Silver. The phone has a water-repellent coating, which increases its appeal. On the software side, the device runs Android 10 out of the box, and it will get an Android 11. This is another disadvantage of owning this device. When it comes to performance, though, the Motorola One 5G Ace is awesome. Qualcomm SM7225 Snapdragon 750G 5G handles the overall performance of the phone. The gaming performance is handled by the Adreno 619 GPU. In the AnTuTu benchmark test, the phone scored 323154 points.

In suitable lighting conditions, the phone turns in, a fine performance but struggles in low lighting. The Motorola One 5G Ace has a triple camera slot on the rear. It has a 48 MP wide-angle, an 8 MP ultrawide, and a 2 MP macro camera. The phone not only has usual features like LED flash, HDR, panorama but also gyro-EIS. On the front, the phone has a 16 MP wide-angle camera for selfies and video calls. When it comes to video recording, the phone can do so in 1080p and 4K. Coming to sensors, the phone has an accelerometer, gyro, proximity, compass, barometer, and a fingerprint sensor on the back. 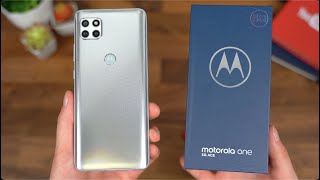 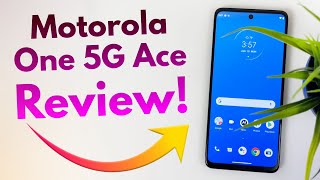