Oh boy, here we have something quite unique. It’s not exactly unheard of, but it’s set apart by some features of Netgear Orbi Wi-Fi System that it possesses. It looks very smooth with no sharp edges or drops, which gives it a real quality look. The letters are written at the bottom, and the font looks quite futuristic. Its main use is ‘blanketing’ your entire home, no matter how big, with a solid, powerful Wi-Fi signal. It all sounds so, so good, but the price isn’t exactly a budget one, but we’ll talk more about that afterward.

You’ll receive two units, and although they look the same – they aren’t. Orbi made them as two very similar looking things, but with different purposes. The first one is a router, where you’ll have one WAN port for Internet connection. The other three ports are dedicated to LAN connectivity between your home devices – PCs and laptops. It’s a fully-fledged router on its own, and you don’t exactly need the other one. But the other one is just a support, and you could call it a satellite that just adds functionality. That functionality is in form of a wireless extender for the main one.

Of course, those satellites can’t work without the main unit, and work as additions. They have 4 additional LAN ports on each of them. One main unit can support and control  3 of these satellites. That will make sure your whole house is covered in a full strength signal, thus allowing you to connect additional devices. All of this makes it a perfect office setting Wi-FI device and a router. But, what makes it stand out, and why is the price of Netgear Orbi Wi-Fi System $285? That’s because it has a unique feature to it.

Other Wi-Fi extenders share the same band as the main router, it’s important to realize. This results in a 50% signal strength loss. Netgear Orbi Wi-Fi System specs use a separate Quad-stream 5GHz band to connect satellites with the main router. The top speed was 1.7GHz, which is giving you bang for your buck, that’s for sure. But wait until you hear this! They’ve done a test in a 3000 ft home to test for coverage. In the analysis, one router and one satellite were able to cover the full area without dead zones. They did it by placing the main unit in the corner, and the satellite in the middle, thus creating a perfect connection.

Now you might wonder about setup difficulties. Let me assure you – it’s as easy as it gets because everything is preconfigured. All you need is – connect a modem to the Netgear Orbi Wi-Fi System main router, just like you would with any other. Next up, place the satellite away from it, and turn it on. That’s it – you’re done! Everything is ready from the start, the only thing you’d have to worry is distance. Place it too far and it won’t have too much signal to share, too close and you won’t cover your whole home. If you’re looking to avoid those troubles, or don’t have that much money to spare, check Google’s answer – Google WiFi. 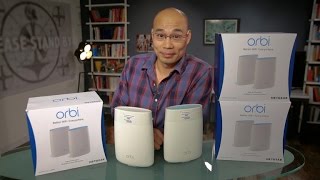 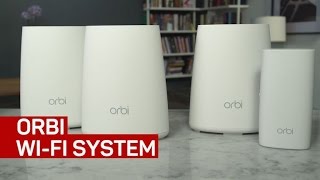 8.5
Post a Review Please note that each user review reflects the opinion of the respectful author. To get approved, make sure that the review is big enough and contains unique opinion.