Nokia 216 is a super-cheap phone from Nokia, released in October 2016. No, this is not a smartphone, nor does it have a touchscreen. Nokia 216 is a fine example of old school mobile phones, with a physical keyboard and a small screen. But a model recently brought back for the fans of the old that just can’t get used to new touch control. Or maybe as a gift for elderly people or less tech-savvy relatives? Whatever the case, it’s been refreshed to fit today’s looks of phones. Nokia 216 features include a TFT display boasting a primitive 240×320 pixels resolution and measuring 2.4″ in size.

It’s not as big of a screen as you might be accustomed to, but it is what it is. And as you can see, it’s a very small phone able to fit into anyone’s hand. Plus, it won’t peek out of your pockets when carried, and can even get lost in your backpack if you don’t watch out. Even though that’s great, there isn’t much to do on this phone except messaging, calling or listening to music. Yes, the Internet browsing is available, but it doesn’t perform well and should be used in the case of emergency only. Like you’re probably used to, and Nokia recognized it – you need two cameras to feel confident.

And here they are – a front-facing and a main camera. They are both VGA and can record video in 240p resolution at 15 fps. It’s just as you’d expect, and we’d recommend gifting it to your grandpa so he can see who’s calling or maybe take a picture of two of his backyard. So why is this phone even released at this time? Well, it’s hard to answer but we’re sure that Nokia tries to bring a super-budget phone for users that don’t want or need all of the fancy stuff offered on smartphones.

It’s for those that are maybe scared to take their main phone when running or in a crowded place. We’re all aware of the mugging, and that you can get robbed for your phone or an expensive watch. Yes, it’s a dark topic, but it might give you an idea why this one is valuable. You won’t be able to store too much by default – only 16 MB of internal memory is present. But it can be expanded with up to 32 GB via a microSD card, and that should satisfy you. Although what would you even place on it? Images do not take a lot of memory, nor do songs.

For a phonebook, you can add up to 2000 entries, see the call records and turn on the flashlight on the back, It’s a feature we see on older Nokia phones, and it’s obviously something people want, so Nokia 216 specs allow it. The battery is ‘only’ 1020 mAh capacity, but that will last you a long time with the stuff we mentioned. It’s, of course, removable. In the end, it’s a good phone to keep in a backpack or a bag. It will allow you to call and text in case of emergency. Or like we mentioned, if you’re scared of your main smartphone falling out of your pocket or getting stolen, this is a good option too. 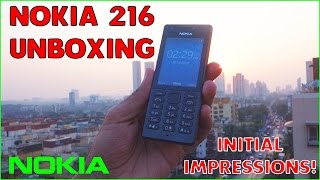 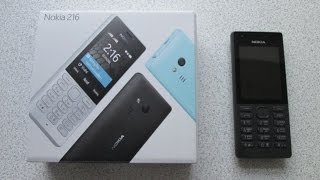