Nokia 5 is one of the few smartphones that Nokia launched in 2017. It has been a hell of a comeback, and we can’t wait to delve deeper in just how much has it returned. Right off the bat, you can notice it sits a bit awkwardly between Nokia 6 and Nokia 5. Both are kind of two ends in the spectrum, the 3 model cheap, while the 6 one is a premium price and quality one. But don’t give up on Nokia 5 yet, it has quite a few things that make it stand out in the crowd. Without further ado, let’s see some of Nokia 5 features:

The body is sleek and elongated and has that metallic look that we really like. It’s really thin as well, and it’s made of aluminum, which means it’s light, only 160g. The front is glass, of course, and sports a Corning Gorilla Glass protection, in case of you being a clumsy person. The thing that makes Nokia 5 even more premium is the fingerprint sensor present. Uniquely, the sensor is below the screen, at a home button place, doubling it. It’s efficient and usually recognizes your fingerprint right away, and if not, give it a second chance. You are certainly happy not to be typing long codes to keep your phone protected, right?

Another great feature of Nokia 5 is the display. It now sports a 5,2-inch screen, but only 1280 x 720 pixels resolution. You shouldn’t let that but stop you, as for an HD resolution screen, it’s surprisingly sharp. We’d bet you won’t notice a significant difference unless you really go and compare it with another phone head to head. The other thing we’re really happy about is that they decided to keep a 3,5mm headphone jack. The jack is certainly getting old, and other alternatives are present, but we’re just not ready as a community to give it up just yet.

We should mention the specs of Nokia 5 as well. Under the hood, you can come across a Qualcomm MSM8937 Snapdragon 430 processor. You’ll also get to choose between 2 and 3GB of RAM. From the information you just read, you’ll realize those are far from the best specs. But remember Nokia 5 isn’t a flagship smartphone, and the price is far from expensive. Taking into consideration an Adreno 505 GPU, we’ve seen Nokia 5 running everything, but not at a great pace. The speed is certainly the issue, but it’s as good as it gets.

To wrap things up, let’s talk about cameras. Nokia 5 sports a 13 MP camera on the back, first of all. In our tests, it has shown to be a good quality, point-and-shoot camera. It can certainly be sufficient for social media feed, but you won’t be winning any competitions soon. The shutter is pretty slow, and the camera app doesn’t have any settings, it’s extremely simple. The front one is 8 MP, which is just enough for a selfie when you’re feeling your best. The battery is a Li-Ion 3000 mAh one, which can last you a day if you’re lucky. We just expected a tiny bit more, with the screen not being a full HD or anything, but this is as good as it gets for this price of Nokia 5 – 299$. 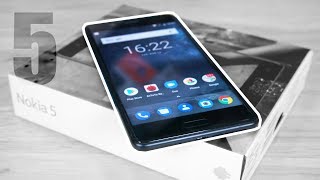 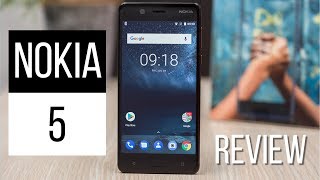