Nokia 7 is an upcoming smartphone from Nokia which has some superior performance upgrades.  From the latest Nokia devices, that is. The device has a pretty solid design similar to many other Nokia models announced so far. The body is quite thin and sleek and fits in your hand comfortably. You can expect to purchase it in two colors that are available – Gloss Black and Matte White. What more would you want, both are classic and can go with any of your outfits, making you look cool. Even if you like the specs of Nokia 7, but not the color, you can always pay a bit more for a silicone cover.

Moving things on, let’s talk about the screen. The screen looks big enough for the resolution provided, as it’s important to realize this isn’t a high-end smartphone. The price of Nokia 7 is only $425, so keep that in mind. Other than that, screen, as we mentioned, is 5.2-inches in diameter. You’ll be looking at a quite sharp surface thanks to the resolution – Full HD (1920 x 1080 pixels). You know what they say: “better safe than sorry”. While we already talked about a silicone cover to protect your Nokia 7, or a custom mask, the screen can still crack.

That’s why they’re using a Corning Gorilla Glass 3 in case of clumsiness on your end. It has a guaranteed protection against cracking and breaking, wear and tear. That doesn’t mean you should go ahead and smash the phone wherever you go or act irresponsibly. There’s an IP54 standard for waterproof and dustproof protection, so you’re safe in that regard as well. Where operating system is concerned, Nokia 7 comes with Android 7.1.1 (Nougat), which is great, to be honest. It’s fast and modern looking, and that’s probably something you want on your phone. Next, we’ll take a look at other Nokia 7 features that’ll make you addicted.

First up – a camera on the back. You will take pictures at a resolution of 16 millions of pixels (MP) which is quite a bit. But size doesn’t matter, right? We’ll agree in this case, but Carl Zeiss optics and dual-LED flash on the back will convince you the picture quality is great too. Nokia 7 is capable of taking decent pictures in low-light conditions, although they’re not insanely good, of course. For that, you’ll need a DLSR camera like Canon EOS Rebel T7i/800D. The camera on the front is only 5MP, which is just… a means to an end and nothing special.

Enough about looks, it’s time we’ve taken a look under the hood. The specs of Nokia 7 that really matter are certainly the brain of the system. The processor inside is Octa-core Qualcomm Snapdragon 630 which, of course, is far from the newest. It’s a perfect fit, though, and a good option for a mid-range phone. Furthermore, it will run almost everything unless you push it to the limit. A GPU to thank for great graphics is Adreno 508, a good combination. When it comes to RAM, you must choose between 4GB and a 6GB model, and the difference is slight and depends on your multitasking habits. 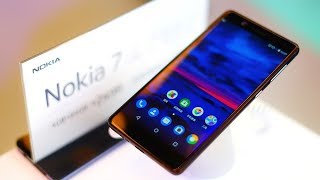