The Nokia C30 is a budget smartphone that was first announced on the 27th of July. It was released almost three months later on the 12th of October 2021. This is quite rare, as we mostly see phones launch within a few days of being announced. One of the biggest highlights of this phone is the near-stock Android experience it delivers. A clean Android experience is, in fact, one of the common highlights of Nokia phones. The phone runs Android 11 (Go edition) and will get security updates for two years. Speaking of twos, the phone supports two Nano-SIM cards and connectivity from 2G to 4G.

The device has a third slot for an SD card and comes in two configurations. The base variant has 3 GB of RAM with 32 GB of internal storage and is priced at ₹10,999 or approximately $147. The other variant has 4 GB of RAM with 64 GB of ROM, and costs ₹11,999 or around $161. For color, you only get to choose between Green and White. Another highlight of this phone is its amazing battery life. For most users, the phone will easily last close to two days on a full charge. The Nokia C30 has a 6000 mAh lithium polymer non-removable battery. Plus, you get a 10W charger inside the box for the device.

On the flip side, the gadget doesn’t support fast charging. One of the biggest downsides of using this phone is that it’s tough to use with one hand. The reason behind this is the phone’s dimensions and its weight. The Nokia C30 measures 237 grams, which is heavy even by today’s standards. Similarly, it measures 7 inches in height, 3.11 inches in width, and 0.39 inches in thickness. The multimedia experience is satisfactory due to the presence of a 6.82-inch HD+ display. The screen-to-body ratio and the PPI density of the phone are 79.9% and 257 respectively. While the device does have a loudspeaker and 3.5 mm headphone jack, the lack of WideVine L1 certification limits users’ multimedia experience.

Unisoc SC9863A processor, which is based on 28 nm technology, handles the overall performance of the phone. While Nokia should receive credit for providing bloat-free phones, the Nokia C30 doesn’t deliver a good performance. The IMG8322 GPU handles the gaming and graphic requirements of this phone. The gaming experience is below average, to say the least. The phone scores 102177 points in the AnTuTu benchmark test. An accelerometer, proximity sensor, and a rear-mounted fingerprint are some sensors available on this device.

Moving to cameras, the phone has a dual-camera setup on the back. It consists of a 13 MP wide-angle camera and a 2 MP depth sensor camera. The rear camera setup has an LED flash and can record videos in 1080p. On the front, the Nokia C30 has a 5 MP camera for selfies and video calls. The camera performance, on the whole, is below average. For communication, the device has Wi-Fi, Bluetooth 4.2, GPS, microUSB 2.0, and USB On-The-Go. While the smartphone lacks support for NFC, it does have FM Radio, which is certainly nice to see nowadays. 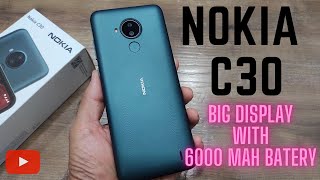 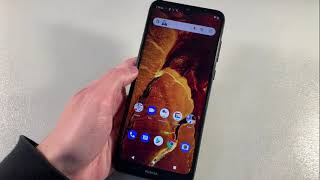