Nokia G11’s biggest strengths are its affordability, battery life, and a clean stock Android experience. If you are concerned with other feature, you need to look elsewhere. Speaking of affordability, the phone comes for €112 which approximately converts to $123. The phone has 3 GB of RAM and 32 GB of internal storage. However, the device doesn’t have other variants, which is surprising. As inexpensive as it is, it would have been better if the phone had 4 GB of RAM. The RAM and memory type used here is LPDDR4X and eMMC 5.1 respectively. While UFS storage would have been better, you can’t complain much considering the price.

The device has a dedicated card slot, which can handle two Nano-SIM cards and an SD card. In terms of connections, Nokia G11 can support 2G, 3G, and 4G. For colors, there are two options, namely, Charcoal and Ice. While the device has a plastic frame and back, it’s quite well-built. Its in-hand feel is just as good. The phone measures 6.48 by 2.99 by 0.33 inches and weighs 189 grams. It’s worth mentioning here that the device isn’t easy to operate with a single hand. Nokia deserves credit for keeping the phone light despite its huge battery. The phone has a 5050 mAh lithium polymer non-removable battery which supports 18W fast charging.

With moderate usage, Nokia G11 should last you around two days. The key areas where the phone lacks are performance and display quality. It has a 6.5-inch HD+IPS LCD screen with a refresh rate of 90 Hz. While its PPI density of 270 is less than ideal, it does have a good screen-to-body ratio of 81.6%. At this price, most manufacturers offer an HD+ screen, but this phone’s display quality is below average. Similarly, the performance isn’t going to blow anyone away. The Unisoc T606 processor turns in an okay performance, at best. You will face lags at times, and therefore, it should only be used for the most basic of tasks.

The device’s gaming requirement is handled by the Mali-G57 MP1 GPU. The device runs Android 11 out of the box, but it will get two years of major operating system updates. It will also get security updates for three years. For this, Nokia should be praised, as few manufacturers provide such regular updates. Coming to sensors, the phone has an accelerometer, proximity, and a side-mounted fingerprint sensor. In the sound department, Nokia G11 has a loudspeaker and a 3.5 mm headphone jack. Considering the price, the phone delivers a decent overall camera performance.

It doesn’t do well in low lighting conditions, though. Nokia G11 has a triple camera setup on the rear. It has a 13 MP, 2 MP macro, and depth-sensor camera. For selfies, the phone has an 8 MP wide-angle camera. The phone’s camera features include LED flash and can record videos in 1080p@30fps. For communication, the phone has dual-band Wi-Fi, Wi-Fi Direct, Hotspot, Bluetooth 5.0, GPS, USB Type-C 2.0, and USB On-The-Go. It not only has FM Radio but NFC as well, which is mostly absent in budget phones. 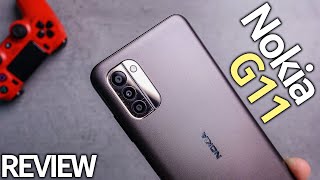