The Nokia G300 is a budget smartphone by Nokia, and its biggest appeal lies in the fact that it is the most affordable 5G smartphone from the company. It was released on the 19th of October 2021, while it was first announced a week back on the 12th of October 2021. The device is available at a price of $199. The device is powered by the Qualcomm SM4350 Snapdragon 480 5G processor that is based on the 8 nm technology. While it is a capable processor, it must be mentioned here that you can easily get much better processors in this price range.

The smartphone has an octa-core processor, and it has an AnTuTu benchmark score of 248374 points. The Adreno 619 GPU looks after the gaming and graphic requirements of this phone. The Nokia G300 runs Android 11 out of the box, and you will get a near-stock Android experience on this phone. The near-stock Android experience is a common highlight among all Nokia Android phones. The device supports connectivity from 2G to 5G but only a single Nano sim, which is a disadvantage of owning this device. The device comes in only one configuration, which has 4 GB of RAM and 64 GB of internal storage.

However, the good thing here is that you do get a dedicated SD card slot for memory expansion. Interestingly, the phone also comes in only one color, which is Meteor Grey. Coming to the screen quality, the phone has a 6.52 inches HD+ screen with a screen resolution of 720 x 1600 pixels and an aspect ratio of 20:9. The device has an IPS LCD panel with a PPI density of 269 and a screen-to-body ratio of 77.3%. Moving to dimensions, the Nokia G300 measures 6.67 inches in height, 3.09 inches in width, and 0.37 inches in thickness. The device weighs 210.1 grams, which is quite heavy.

As far as cameras are concerned, the smartphone has a triple camera set-up on the back. It has a 16 MP wide-angle camera, a 5 MP ultrawide camera, and a 2 MP depth sensor camera. The rear camera set-up has camera features like LED flash, HDR, and panorama. On the front, the Nokia G300 has an 8 MP wide-angle camera for taking selfies and attending video calls. Both the front and the back camera setup can record 1080p videos at 30fps, but only the back camera setup is capable of recording 1080p videos at 60 fps. Coming to the sound aspects of this phone, it has a loudspeaker and a 3.5 mm headphone jack.

For connectivity, the gadget has dual-band Wi-Fi, Hotspot, Bluetooth 5.0, and GPS. Similarly, the device has USB Type-C 2.0 and USB On-The-Go. While the device lacks Radio, it does have NFC, which isn’t very common in phones that belong to the budget segment. For sensors, the phone has a side-mounted fingerprint scanner, accelerometer, and proximity. Coming to matters of battery and charging, the Nokia G300 has a 4470 mAh non-removable battery. The device supports 18W fast charging. 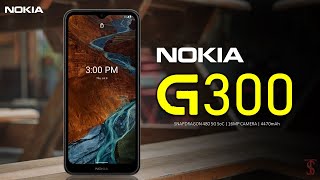