The Nokia G50 is powered by the Qualcomm SM4350 Snapdragon 480 5G processor, which is based on the 8nm technology. It has an Octa-core processor, whose AnTuTu 9 benchmark score is 286814. The device runs Android 11 out of the box, but that’s not all, as it is part of the Android One program.  The device will get Android updates for two years and security updates for one additional year. One of the biggest advantages of Nokia smartphones is that it offers a bloat-free stock android experience to its users, and the Nokia G50 continues to deliver on that. The GPU of the device is Adreno 619.

The smartphone comes with a massive non-removable Lithium-polymer 5000 mAh battery.  The Nokia G50 has a USB Type C port, and it supports the brand’s proprietary fast charging technology. On paper, the device should last you a day easily, if you aren’t an extreme user. The device will support both 4g and 5g, along with VoLTE support. Staying on the subject of connectivity, the device comes with a hybrid slot. Therefore, you won’t be able to use two Nano-SIM cards and an SD card at the same time. Other connectivity features includes Wi-Fi 802.11, ac/ax/b/g/n/n 5GHz, Bluetooth 5.0, and Mobile Hotspot.

The phone retains the 3.5 mm headphone jack, which is nice to see.  The phone lacks an in-display fingerprint sensor, but it does have a side fingerprint sensor. The Nokia G50 has a 6.82 inch super AMOLED Display and is splash-proof. Besides, the smartphone has an IP52 rating for dust protection.  The resolution of the device is 720 x 1640 pixels while the pixel density is 263 PPI. The smartphone’s aspect ratio is 20:9 and looking at the super AMOLED Display, it’s safe to say that you will have a great time, consuming video content on this smartphone.

The gaming experience, however, would be limited by the standard 60 Hz refresh rate. But in all fairness, the Nokia G50 isn’t trying to be a gaming-centric smartphone. It’s trying to be a practical and affordable smartphone whose main appeal is regular updates, stock android experience, and its display. The device lacks a punch-hole display, but it does have a waterdrop notch.  The internal storage of the Nokia G50 will be 64 GB while the RAM would be 4 GB. There isn’t another variant of the phone, which is quite rare to see in today’s smartphone market.

The phone was launched on the 22nd of September 2021 in the U.K. at GBP 199.99 that approximately converts to $268. The phone will most likely be released in two colors, which are Ocean Blue and Midnight Sun. The mid-ranger will have a triple camera setup on the back. The main 48MP camera will have digital zoom, while the 5MP and the 2MP camera will have an ultra-wide camera and depth sensor.  Other camera features include Auto Focus, Bokeh Effect, Continuous Shooting, face detection, Geo-tagging, and High Dynamic Range mode (HDR).

On the front, it has an 8MP wide-angle main camera for shooting selfies and video calls. It has a Light sensor, Proximity sensor, Accelerometer, and Gyroscope.  The phone is expected to be released in the first week of October 2021. As usual, expect to hear more from Nokia in the coming days. 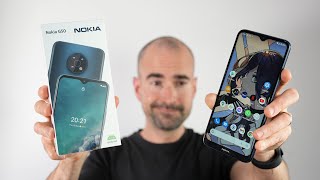 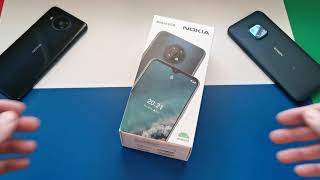