Nokia X10 is a phone which shines in a few areas, but it surely doesn’t explain its price. It isn’t a bad phone by any means, it’s overpriced. Here, it should be mentioned that the phone has a starting price of $359. Where the phone stands out from the competition, is how eco-friendly it is. Along with the phone, you get a 100% compostable case, but you don’t get a charger. However, it can’t be denied that many won’t agree with the latter move. One of the biggest advantages of owning this device is its awesome battery life. On average, the phone lasts around somewhere between 1 and 1.5 days.

It has a 4470 mAh Li-Po non-removable battery with support for 18W fast charging. Considering the price, the charging speed could have been way better. Communication options include USB Type-C 2.0, USB On-The-Go, GPS, Bluetooth 5.0, dual-band Wi-Fi, and Hotspot. Nokia X10 is one of the rare phones to feature both NFC and FM Radio. Coming to the cameras, the phone performs decently, while the portrait image results certainly exceed expectations. The device has a 48 MP wide-angle, 5 MP ultrawide, 2 MP macro, and depth sensor camera on the back.

Additionally, Nokia X10 has an 8 MP wide-angle camera for selfies and video communications. The device can record videos in 1080p@30fps, and it has Zeiss optics besides the usual camera features. Performance is a department where the phone is especially weak. Qualcomm Snapdragon 480 5G is the chipset used here while the GPU is Adreno 619. You will have to deal with stutters and lags with most tasks if you choose to buy this phone. However, it offers a near-stock Android experience which is highly uncommon today. On top of that, it will get 3 major operating system updates which is a huge advantage.

As far as updates are concerned, Nokia X10 is surely among the better mid-range phones. The phone’s display quality is also good but once again it doesn’t justify the price. It has a 6.67-inch IPS LCD screen which is protected by Corning Gorilla Glass 3. While the PPI density of 395 is good, the screen-to-body ratio is 79.8% isn’t going to impress many. You can easily get rival phones that offer AMOLED screens with a 90 Hz refresh rate. In the sound department as well, the phone has missed out on stereo speakers which are common in this segment. It has all the usual sensors.

The phone isn’t going to win any awards for looks, but it is incredibly well-built. At the same time, it isn’t the easiest to move around. For reference, the device weighs 210 grams and measures 6.65 by 3.14 by 0.36 inches. It is protected against splashes. For color, the options are Forest and Snow. The device comes in three RAM / ROM combinations which are 4 GB / 128 GB, 6 GB / 64 GB, and 6 GB / 128 GB. The phone has a Hybrid SIM slot, which means you can either use two Nano-SIM cards at the same time or one Nano-SIM with an SD card. Nokia X10 can support connections up to 5G, as is expected from a phone of this budget. 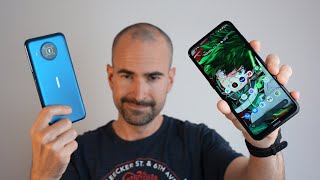 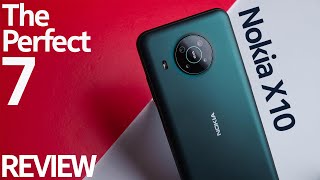