The OnePlus 9RT was launched on the 19th of October 2021, and it’s an interesting phone. One of the biggest advantages of owning a OnePlus device is its operating system, Oxygen OS. However, you don’t get the familiar Oxygen OS on this phone, which is replaced by ColorOS. Sure, ColorOS is great, but it’s safe to say that it’s no Oxygen OS. It will be intriguing to see how audiences react to ColorOS in the long run. Apart from ColorOS 12, the device runs Android 11. To the company’s credit, the phone will get three major Android version updates and four years of security updates.

The performance of the phone is brilliant due to the Qualcomm SM8350 Snapdragon 888 5G processor. The aforementioned processor is considered to be one of the fastest processors in 2021. The Adreno 660 GPU ensures a smooth gaming experience. The biggest highlights of the OnePlus 9RT are its camera and battery performance. The OnePlus 9RT has a 4500 mAh lithium polymer non-removable battery that comes with 65W fast charging capabilities. As per the ads, the device can 0% to full charge in just 29 minutes, which is quite impressive.

In the communication department, the phone has USB Type-C 2.0, USB On-The-Go, GPS, Bluetooth 5.2, Wi-Fi, and Hotspot. The device has support for NFC, but you won’t be able to listen to FM Radio on it. The camera performance, as previously mentioned, is very good. The phone has a 50 MP wide-angle camera besides a 16 MP ultrawide camera and a 2 MP macro camera on the back. The 50 MP main camera has OIS, which is nice to see. The OnePlus 9RT supports video recording up to 4K and has useful features likes Auto HDR and gyro-EIS. For selfies, the phone has a 16 MP wide-angle camera. The selfie camera also has features likes Auto HDR, and gyro-EIS and can record in 1080p.

As far as network connectivity is concerned, the device supports 2G, 3G, 4G, and 5G. The device has room for two Nano-SIM cards, but not an SD card. The device has all the usual sensors. The OnePlus 9RT comes in three configurations. Two of the variants have 8 GB of RAM with 128 GB and 256 GB of internal storage. The more expensive variant has 12 GB of RAM with 256 GB of internal storage. The starting price of the phone is about €440, which converts to $498. For color, there are three options, Black, Silver, and Blue. The multimedia experience of this phone is amazing.

The device has a 6.62 inches FHD+ AMOLED screen which is Corning Gorilla Glass protected. The device has a screen-to-body ratio of 87.9% and a PPI density of 397. The presence of HDR10+ certification and 120 Hz refresh rate contributes a lot to the multimedia experience, as well. What also adds to the experience is the presence of stereo speakers. Coming to the phone’s dimensions, it is 6.39 inches tall, 2.94 inches wide, and 0.33 inches thick. Similarly, the OnePus 9RT has an average weight of 198.5 grams. 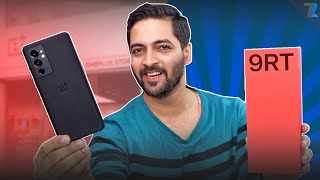 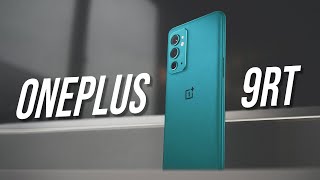