OnePlus Nord CE 2 5G is a successor to Nord CE and was first announced on the 17th of February 2022. The phone was released just five days later on the 22nd. Unlike most other smartphone manufacturers, OnePlus only releases a handful of phones every year. Therefore, this model is undoubtedly an interesting release. The phone comes in Gray Mirror and Bahama Blue and has two hardware variants. Both variants have 128 GB of internal storage, but 6 GB or 8 GB of RAM. The phone comes at a starting price of ₹23,999 which roughly converts to $321.

One of the greatest advantages of owning this phone is that it has a dedicated card slot. The phone can accommodate two Nano-SIM cards besides an SD card. As for the connections, the OnePlus Nord CE 2 5G can support 2G, 3G, 4G, and 5G. The phone’s build quality is good as it feels sturdy despite its plastic build. The phone is not only protected by Corning Gorilla Glass 5 on the front but the back as well. There’s another positive in the sense that the phone weighs just 173 grams. Coming to the dimensions, the phone measures 6.32 by 2.88 by 0.31 inches.

The phone’s multimedia experience is just as good. The phone has a 6.43-inch FHD+ AMOLED screen whose aspect ratio is 20:9. It has a screen-to-body ratio of 84.9% and an impressive PPI density of 409. The presence of a 3.5 mm headphone jack and HDR10+ supports only improves the experience. Something that’s missed here is the stereo speakers. On the software side, the OnePlus Nord CE 2 5G runs Android 11 with OxygenOS 11 on top. The device is mostly clean, so you don’t need to worry about bloatware. The phone will get Android updates for 2 years and security updates for one additional year. That’s unquestionably a plus.

The performance delivered by the MediaTek MT6877 Dimensity 900 5G processor is decent. The gaming performance, on the other hand, is handled by the Mali-G68 MC4 GPU. Coming to cameras, its performance is acceptable, though the video recording performance could have been better. OnePlus Nord CE 2 5G has a triple camera lens on the back. The phone has a 64 MP wide-angle, 8 MP ultrawide, and 2 MP macro camera. For selfies, the phone features a 16 MP wide-angle camera. The phone’s camera features include LED flash, HDR, panorama, and gyro-EIS. The front camera can record videos in 1080p, while the rear camera set-up can do so in 1080p and 4K.

In the communication department, the phone has USB Type-C 2.0, GPS, USB On-The-Go, Wi-Fi Direct, hotspot, and the latest Bluetooth 5.2 and Wi-Fi 6. The device also sports NFC support, which is expected. The gadget’s battery life is great, as it should last you for more than 1.5 days if you are an average user. On that subject, it should be mentioned that the phone has a 4500 mAh, Li-Po non-removable battery. Moreover, OnePlus Nord CE 2 5G not only supports 65W fast charging but reverse charging as well. As far as sensors are concerned, the phone has an accelerometer, gyro, proximity, compass, and an under-display fingerprint sensor. 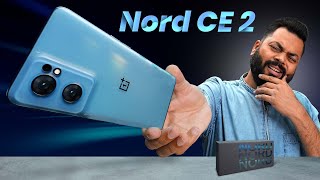 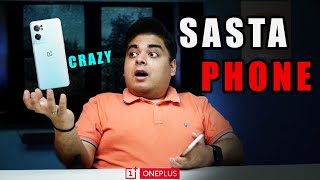