OnePlus announced the OnePlus Nord CE (Core Edition) 5G on the 10th of June 2021 and released it, a day later on the 11th of June 2021. OnePlus’ devices are universally loved, and what makes this device unlike any other OnePlus device is its price. The pricing starts at $299 making it the most budget-friendly OnePlus device yet. The device comes in three configurations, 6 GB RAM with 128 GB of internal storage, 8 GB RAM with 128 GB of internal storage, and 12 GB RAM with 256 GB of internal storage. The RAM type is LPDDR4X and the memory type is UFS 2.1, and not eMMC, which should make your experience smoother. For color, there are three options, Blue Void, Charcoal Ink, and Silver Ray.

The OnePlus Nord CE 5G is powered by the Qualcomm SM7225 Snapdragon 750G 5G processor, which is based on the 8 nm technology. The device has an octa-core processor and its AnTuTu benchmark score is 388906. The phone runs Android 11 out-of-the box, while the OS would be Oxygen OS 11.0.5.5. The device measures 6.27 inches in weight, 2.89 inches, and 0.31 inches in thickness. The device weighs 170g, making it almost 20g lighter than most of its competitors. Adreno 619 handles your gaming requirements, while the 90Hz refresh rate also helps in that regard. The device has a plastic frame and a plastic back, which can be considered as a drawback of using this phone.

The device supports two Nano-SIMs, and connectivity from 2G to 5G. The OnePlus Nord CE 5G has a 6.43 inches Fluid AMOLED display, which consumes less battery than other AMOLED displays, if the advertisements are to be believed. The screen-to-body ratio, screen resolution, aspect ratio, and PPI density are 84.9%, 1080 x 2400 pixels, 20:9 ratio, and 410 respectively. It has a 64 MP wide-angle camera, 8 MP ultra-wide camera, and a 2 MP depth sensor camera. The back camera set-up allows you to record videos at 1080p and 4K, unlike the front 16 MP wide-angle camera that only captures videos at 1080p. Rear camera features include LED flash, HDR, and panorama, while the front camera features include HDR.

Coming to connectivity, the phone has dual-band Wi-Fi, Wi-Fi Direct, Hotspot, Bluetooth 5.1, and GPS. The gadget lacks FM Radio support, but has NFC. However, the device retains the 3.5 mm headphone jack, which is nice to see as it meets the expectation of a value for money mobile device. As far as sensors are concerned, the OnePlus Nord CE 5G has an in-display Fingerprint Sensor, Accelerometer. Electronic Compass, Gyroscope, Ambient Light Sensor, Proximity Sensor, and Sensor Core. Coming to matters of battery and charging, the smartphone has a 4500 mAh non-removable lithium-polymer battery. It supports 30W fast-charging and the device can go from 0 to 70 percent charge in 30 minutes, as per the advertisements. Besides, the device has USB Type-C 2.0 and USB On-The-Go. However, it’s worth mentioning here that while the battery specs looks good on paper, users have revealed that battery drain is an issue on this phone. 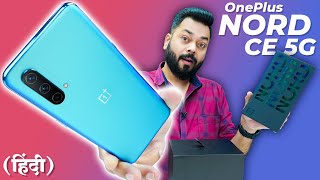 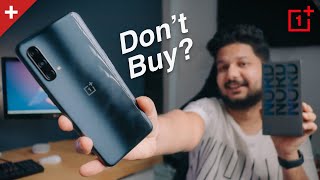