Priced at £169 or approximately $228, Oppo A16s is a good option for those looking for a mid-range smartphone from the company. However, it surely won’t be making it to the best value for money smartphone lists. The phone was first released on the 14th of August 2021, and it only comes in a single configuration of 4 GB RAM and 64 GB ROM. The memory type used here is eMMC 5.1 instead of the faster UFS. The phone has a triple card slot that can accommodate an SD card besides two Nano-SIM cards.

As for the connections, the device can support 2G, 3G, and 4G. For color, there are two options, namely Pearl Blue and Crystal Black. The device is both lightweight and well-constructed, so you shouldn’t have many complaints about its build quality. The phone weighs in at 190 grams and measures 6.45 inches in height, 2.98 inches in width, and 0.33 inches in thickness. Additionally, Oppo A16s has an IPX4 certification, meaning it is resistant to water splashes. It’s also worth mentioning here the phone attracts fingerprints easily, so it’s better to use it with a case.

Speaking of the case, you do get a protective case in the box of the Oppo A16s. The multimedia experience offered by the phone is decent but nothing exceptional. The phone has a 6.52-inch FHD+ IPS LCD screen whose aspect ratio is 20:9. The device is usable in direct sunlight thanks to the 480 nits brightness. The presence of a 3.5 mm headphone jack and a loudspeaker also improves the experience. On the flip side, the device only has a PPI density of 269. Coming to the software, the device runs Android 11 with ColorOS 11.1 on top.

The performance delivered by the very popular MediaTek MT6765G Helio G35 processor is good, but you might have to deal with occasional lags. PowerVR GE8320 GPU, on the other hand, looks after the phone’s gaming requirements. In the AnTuTu benchmark test, the Oppo A16s managed to achieve a score of 110994 points. For sensors, the phone has an accelerometer, proximity, compass, and a fingerprint sensor on the side. Coming to cameras, the phone has a triple camera slot on the back. It has a 13 MP wide-angle, 2 MP macro, and depth sensor camera.

The main camera does turn in a good performance, but the same cannot be said for others. The 8 MP wide-angle selfie camera, on the other hand, takes acceptable shots. Oppo A16s has features like LED flash, HDR, and panorama and can record in 1080p at 30fps. In the communication department, the phone has dual-band Wi-Fi, Wi-Fi Direct, Bluetooth 5.0, GPS, and Hotspot. The device also has NFC, USB Type-C 2.0, and USB On-The-Go.

The best part about owning the Oppo A16s smartphone is its battery performance. The phone has a 5000 mAh lithium polymer non-removable battery that supports 10W fast charging. Post complete charge, you should be able to get more than 1.5 days of use out of it. On the negative side, it should be said that Oppo should have provided faster-charging capabilities at this price point. 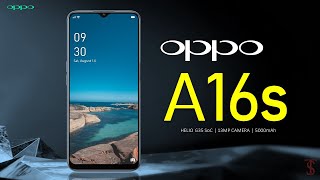