The Oppo A55 is one of the newer additions to the A-series line-up, which is known for including budget-friendly phones. The phone was both announced and released on the 1st day of October 2021. The phone is priced at ₹15, 490 (approximately $208) for the 4 GB RAM and 64 GB ROM variant. The other variant has 6 GB of RAM with 128 GB of internal storage, and it comes at a price of ₹17, 490 (approximately $235). Just like its configurations, there are two options for colors once again, which are Rainbow Blue and Starry Black.

The phone has a dedicated card slot so that you can extend the internal memory if needed. Besides an SD card, the Oppo A55 has room for two Nano-SIM cards that supports connectivity from 2G to 4G. One of the biggest highlights of this device is its build quality. The phone is splash-proof, while the screen is NEG T2X-1 protected. The phone has a 6.51 inches HD+screen that can go up to 550 nits of brightness. It has a screen-to-body ratio of 82.6%, an aspect ratio of 20: 9, and a PPI density of 270. The multimedia experience is good even though it has an HD+ screen.

The experience is further improved by the presence of a loudspeaker and a 3.5 mm headphone jack. Coming to the dimensions, it measures 6.44, 2.98, and 0.33 inches in height, width, and thickness respectively, Similarly, the device weighs 193 grams which isn’t too light or heavy by today’s standards. On the software side, the Oppo A55 runs Android 11 with ColorOS 11.1 on top. The MediaTek MT6765G Helio G35 processor handles the overall performance of the phone, which is fine. However, even at this price point, Oppo could have provided a better processor.

The PowerVR GE8320 GPU handles the gaming performance of the phone. The camera performance is average, while the selfie camera performs better. The camera has a triple camera set-up on the back. It has a 50 MP wide-angle camera, a 2 MP macro, and a 2 MP depth sensor camera. The rear camera set-up has features like LED flash, HDR, and panorama. On the front, the gadget has a 16 MP wide-angle camera for selfies and video calls. Coming to video recording, both the front camera and the rear camera set-up can record videos in 1080p. The Oppo A55’s sensors include an accelerometer, proximity, compass, and a side-mounted fingerprint sensor.

For communication, it has dual-band Wi-Fi, Wi-Fi Direct, Hotspot, Bluetooth 5.0, and GPS. Besides, it has USB Type-C 2.0 and USB On-The-Go. The Oppo A55 lacks NFC, which is expected. What’s surprising is the absence of FM Radio support. The phone’s battery backup is quite good, as it should easily last you for a day on a full charge if you are an average user. On the other hand, if you are a light user, the device should last you for close to one and a half-day. The device has a 5000 mAh battery that supports 18W fast charging. 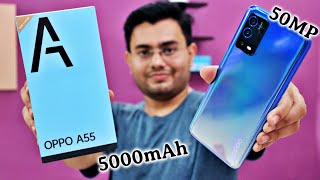 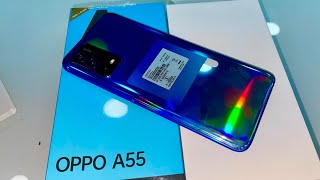