Oppo A96 is one of those phones that isn’t going to top any value-for-money smartphone lists. What it would surely be known for is that it is an all-rounder. If we were to pick the best part aspect of owning this smart device, it would be its superb battery life. The phone has a 5000 mAh Li-Po non-removable battery that lasts around two days on moderate use. If you like to use your device even less, it should last for an additional half-day. This is highly impressive, to say the least. It supports 33W fast charging that can get the phone from 0 to 50% in 26 minutes, as per the ads. This is okay, but multiple similar-priced phones offer much faster charging.

The phone’s overall camera performance is decent. Oppo A96 has a 50 MP wide-angle and 2 MP depth sensor camera on the rear. For selfies, the phone features a 16 MP wide-angle camera on the front. The device has features like LED flash, HDR, and panorama and can record videos in 1080p. For a phone that comes in at a starting price of about €300 (around $321), it should have supported 4K video recording. What’s also decent is Oppo A96’s display quality. Once again, it can’t be denied that you can get similar priced phones that offer stereo speakers as well as an AMOLED screen.

The phone has a 6.59-inch FHD+ IPS LCD screen with a refresh rate of 90 Hz. Its screen-to-body ratio and PPI density are 84% and 401 respectively. The gadget not only has a loudspeaker but also a 3.5 mm headphone jack, which isn’t very common in mid-range phones. It is well-built despite its plastic back and frame. The phone doesn’t pick up fingerprints easily, which is a major win. Further, the device has IP5X certification for being dustproof and IPX4 certification for being waterproof, which is also remarkable. The device can not only be operated with one hand, but it is lightweight as well.

For reference, the smartphone weighs 191 grams and measures 6.47 by 2.98 by 0.33 inches. The Qualcomm Snapdragon 680 4G processor turns in a satisfactory performance. Its gaming duties are handled by the Adreno 610 GPU. If your priority is gaming, it’s better to look elsewhere. As for the software, Oppo A96 runs Android 11 out-of-the-box and ColorOS 11.1. Seeing how the phone was released as recently as the 16th of March 2022, it should have run the latest Android 12. When it comes to sensors, the phone has a side-mounted fingerprint sensor, accelerometer, proximity, and compass.

It supports dual-band Wi-Fi, Hotspot, Bluetooth 5.0, GPS, USB Type-C 2.0, and USB On-The-Go. While the absence of FM Radio was expected, the lack of NFC is shocking. On the bright side, the presence of an SD card slot is appreciated. Besides an SD card, the phone can support two Nano-SIM cards and connections from 2G to 4G. The absence of 5G is certainly a major con. Oppo A96 comes in Starry Black and Sunset Blue and has two variants. Both variants have 8 GB of RAM with 128 GB and 256 GB of internal storage. 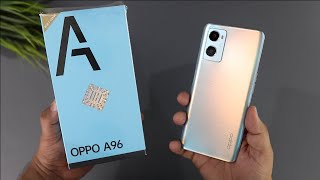 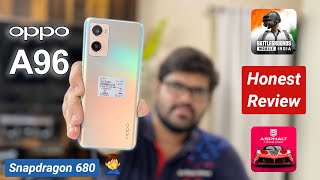