The Oppo Reno6 5G was launched on the 11th of June 2021 while it was first launched on the 27th of May 2021. It is a cheaper version of Oppo Reno 6 Pro. The device is powered by the MediaTek MT6877 Dimensity 900 5G processor that is based on the 6 nm technology. Mali-G68 MC4 handles the gaming and graphic requirements on this phone which is further supported by the 90 Hz refresh rate. It has an octa-core processor and its AnTuTu score is 431885. The device has dual Nano-SIM cards and supports connectivity from 2G to 5G. However, the device lacks an SD card slot.

The smartphone runs Android 11 out of the box, with the Android skin being Oppo’s very own ColorOS 11.3. The phone comes in only one configuration, that is with 8 GB of RAM and 128 GB of internal storage. The price of the phone is ₹29,750 which translates to $395. In today’s times, it is quite uncommon for mobile companies to release their phones in only one RAM and storage configuration. For color, there are two options, Stellar Black, and Aurora. The memory type is UFS 2.1 and the even better thing is that you can expand the phone’s RAM by up to 5 GB. Coming to the sound department, it has a loudspeaker but lacks a 3.5 mm headphone jack.

When it comes to the phone’s dimensions, it measures 6.17 inches in height, 2.84 inches in width, and 0.30 inches in thickness. The device weighs 182 grams, which is definitely on the lighter side. The Oppo Reno6 6G has a 6.43 inches AMOLED screen with a screen-to-body ratio of 88.3% and an aspect ratio of 20:9. The device can go up to 750 nits of brightness and has a screen resolution of 1080 x 2400 pixels and a PPI density of 409. Going by the specs, it’s safe to say that the multimedia media performance of this phone should be pretty good.

Coming to the camera performance, the phone has a triple camera set-up on the back. It has a 64 MP wide camera, an 8 MP ultrawide camera, and a 2 MP macro camera. The rear camera set-up has features like LED flash, HDR, panorama and can record videos at 4K and 1080p. On the front, the phone has a 32 MP wide-angle camera for taking selfies and video calls. The front camera can record videos at 1080p. As far as matters of communications are concerned, the device has dual-band Wi-Fi, Wi-Fi Direct, Hotspot, Bluetooth 5.2, and GPS. While the device lacks Radio, it does have USB Type-C 3.1, USB On-The-Go, and NFC.

Sensors include an under-display fingerprint scanner,  accelerometer, gyro, proximity, compass, and color spectrum. The Oppo Reno6 5G is supported by a 4300 mAh lithium polymer non-removable battery. The device supports 65W fast charging. The gadget supports Oppo’s SuperVOOC 2.0 technology and if the advertisements are to be believed, the company can go from 0 to 100 in just 28 minutes. 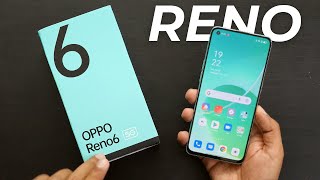 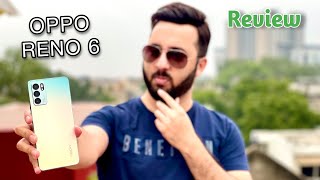