Poco F4 GT is a flagship phone that delivers great performance, but it misses out in the battery department. If you can overlook that, it’s a solid phone. The phone has a 4700 mAh Li-Po battery which gets you over the day on average use. With heavy usage, you might find yourself looking for a charger in the evening. Now, this kind of battery backup is fine, but you can get similar-priced phones that provide a better one. The phone might not top battery backup charts, but it’s surely among the best when it comes to charging time. It supports 120W fast charging which can get the phone from 0 to 100% of charge in just 17 minutes, which is exceptional.

That’s not all, though, as the phone supports Power Delivery 3.0 and Quick Charge 3+ as well. The phone’s overall performance is expectedly superb thanks to the Qualcomm SM8450 Snapdragon 8 Gen 1 processor. Adreno 730 delivers a super smooth gaming experience, which is no surprise given its hardware and the fact that it’s a gaming-centric phone. On the software side of things, Poco F4 GT runs Android 12 with MIUI 13 on top. Gaming focussed phones are not known for their camera performance and unfortunately, this one is no different.

Its 64 MP wide-angle main camera is acceptable, but the other cameras are below average. Besides the aforementioned one, the phone has an 8 MP ultrawide, and 2 MP macro sensor camera on the back. For selfies, the phone has a 20 MP wide-angle front camera. The rear camera setup can record videos up to 4K while it is limited to 1080p for the front one. When it comes to sensors, the phone has a side-mounted fingerprint sensor, accelerometer, gyro, compass, color spectrum, and virtual proximity sensor. Poco F4 GT supports dual-band Wi-Fi, Hotspot, Bluetooth 5.2, GPS, USB Type-C 2.0, and USB On-The-Go.

While the phone lacks FM Radio, it has NFC and Infrared Port. The phone has a stunning look and its display quality is awesome as well. It has a glass back and front with an aluminum frame. The presence of Physical magnetic pop-up gaming triggers is surely a unique aspect of Poco F4 GT. It weighs 210 grams, which is surely on the heavier side. Coming to the dimensions, the phone measures 6.40 by 3.02 by 0.33 inches. The device has a 6.67-inch FHD+ AMOLED screen protected by Corning Gorilla Glass Victus. It not only has support for HDR10+ but also has a refresh rate of 120 Hz.

If you are picky about the audio quality, Poco F4 GT has got you covered in that regard as well. The phone has High-resolution audio tuned by JBL and four speakers, which is incredibly rare. Its starting price is €499 which approximately converts to $526. The phone has two variants and comes in Stealth Black, Knight Silver, and Cyber Yellow. The two versions have 8 GB RAM with 128 GB ROM and 12 GB RAM with 256 GB ROM. It doesn’t support a memory card but can handle two Nano-SIM cards and connections from 2G to 5G. 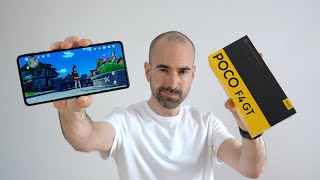 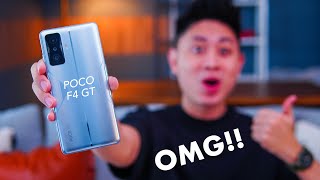