Poco F4 is a great all-around phone that comes in at a starting price of about €400 (roughly $422). It delivers great value for money and is, in fact, one of the best phones in its segment. The phone comes with some bloatware, which is its only con. Even here, it can’t be denied that you can find several similar-priced phones that ship with significantly more bloatware. Apart from that, the software experience is good. The device runs Android 12 out-of-the-box, with MIUI 13 for Poco on top. Overall performance is super smooth thanks to the Qualcomm Snapdragon 870 5G chipset.

This was expected from Poco F4 since the aforementioned chipset is among the strongest chipsets in the segment. Adreno 650 GPU delivers a very good gaming performance as well. Among the multiple reasons gaming performance is this good is the presence of a 120 Hz refresh rate. It has a 6.67-inch FHD+ AMOLED screen with support for HDR10+ and Dolby Vision. The phone’s PPI density and screen-to-body ratio are 395 and 86.6% respectively. It can go up to 1300 nits of brightness. Therefore, you will have no issue using the phone outdoors, no matter how bright the lighting conditions are.

In the sound department, the phone has resolution audio and stereo speakers. While the phone does lack a headphone jack, you don’t miss out on an awesome multimedia experience. The device’s design is especially impressive. Poco F4 is among the few phones in its segment that have a glass back with an aluminum frame. Its glass front is protected by Corning Gorilla Glass 5. On the rear, the phone’s glass back panel does a good job of keeping fingerprints and smudges at bay. Similarly, the phone has IP53 certification for dust and splash resistance, for which Poco also deserves credit.

Good things don’t end there, as the phone is comfortable to hold thanks to its curved edges and manageable weight. For reference, the phone weighs 195 grams and measures 6.43 by 2.99 by 0.30 inches. Poco F4 comes in three color schemes: Moonlight Silver, Night Black, and Nebula Green. Coming to the cameras, the phone’s overall camera performance is decent. It has a 64 MP wide-angle camera with OIS, 8 MP ultrawide, and a 2 MP macro sensor camera on the rear. The main camera is easily the star of the show. For selfies, it has a 20 MP wide-angle camera up front.

The phone can record videos up to 4K@60fps, although the selfie camera is limited to 1080p@30fps. It has all the usual camera features and sensors, including a side-mounted fingerprint sensor. Poco F4 has an all-day battery life, but considering the competition, it could have been better. It has a 4500 mAh Li-Po non-removable battery with support for 67W fast charging. As evident, the phone is one of the best in its class when it comes to charging speed. 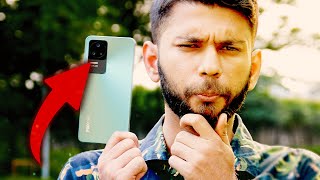 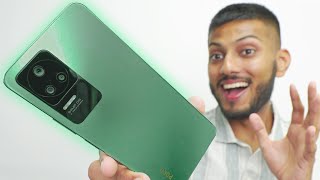