Poco M2 Reloaded, as the name suggests, is a newer variant of the Poco M2 and was released on the 21st of April 2021. The phone is priced at ₹11465, or approximately $153. The phone has 4 GB of RAM and 64 GB of internal storage. While the phone does allow you to expand its internal storage via an SD card, it doesn’t have another variant. In comparison, the Poco M2 smartphone has two variants. Both variants have 6 GB of RAM and 64 GB or 128 GB of internal storage. Also, Poco M2 comes at a starting price of ₹13800, which roughly converts to $185.

For color, the Poco M2 Reloaded allows you to choose between Greyish Black and Mostly Blue. The phone can support two Nano-SIM cards and connectivity from 2G to 4G. On the other hand, the Poco M2 comes in Brick Red, Pitch Black, and Slate Blue. This is where the differences between the two phones end. In almost every other respect, the two phones are almost identical. Besides affordability, the phone’s biggest highlight is its battery backup. The device has a 5000 mAh lithium polymer non-removable battery that supports 18W fast charging.

If you are an average user, you should be able to get around 1.5 days of use out of it. The Mediatek MT6769V/CU Helio G80 processor delivers a good performance, while the gaming performance is handled by the Mali-G52 MC2 GPU. In the AnTuTu benchmark test, the phone managed a score of 203000 points. Considering the price, the phone delivers a great multimedia experience. The phone has a 6.53-inch FHD+ IPS LCD screen that has an aspect ratio of 19.5:9. Additionally, the phone has a screen-to-body ratio of 83.2% and a PPI density of 395.

The multimedia experience is further improved by the presence of a loudspeaker and 3.5 mm headphone jack. The brightness of 400 nits ensures you don’t face issues while using the phone outdoors. Speaking of the screen, it is protected by Corning Gorilla Glass 3 while the phone has a water-repellent coating. Poco M2 Reloaded is well-built, although it does have a plastic body. The device weighs 198 grams, which does make it easy to use. Coming to the phone’s dimensions, it measures 6.43 inches in height, 3.03 inches in width, and 0.36 inches in thickness.

On the software side of things, the device runs Android 10 out of the box with MIUI 12 on top. As it’s MIUI, you will have to deal with bloatware, which is expected. What wasn’t expected was that the device comes with Android 10 instead of Android 11. This is one of the few cons of owning Poco M2 Reloaded. The second-biggest downside of this device is its average camera performance. The phone has a quad-camera set-up on the back. It has a 13 MP wide-angle, 8 MP ultra-wide, 5 MP macro, and 2 MP depth sensor camera.

The phone has features like LED flash, HDR, and panorama, and can record in 1080p. For selfies, the phone has an 8 MP wide-angle camera. As for sensors, the device has an accelerometer, proximity, compass, and a rear-mounted fingerprint sensor. In the communication department, the device has USB Type-C 2.0, USB On-The-Go, GPS, Bluetooth 5.0, dual-band Wi-Fi, Wi-Fi Direct, and Hotspot. What’s nice to see is that the device has NFC and an infrared port, which isn’t very common. Finally, you can listen to FM Radio on Poco M2 Reloaded without your wired headphones. 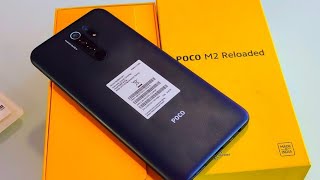 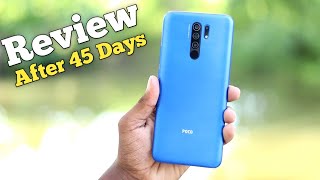