Poco X4 GT is a great choice if you’re looking for a phone that delivers superb performance and fast charging. The chipset used here is MediaTek Dimensity 8100 while the GPU is Mali-G610 MC6. Gaming, as you would expect, is smooth as well. On the software side of things, the phone runs Android 12 out of the box, with MIUI 13 for Poco on top. While it isn’t known how many major operating system updates the phone will receive, we know it’ll get security updates for 4 years. This is impressive, to say the least. As for the battery life, it lasts for more than a day on average use.

As previously mentioned, the phone is superb in the fast charging department. Poco X4 GT has a 5080 mAh Li-Po non-removable battery that supports 67W fast charging. If the ads are to be believed, the phone can go from nil to full charge in 46 minutes. It also supports USB Power Delivery 3.0. As for the cameras, the phone’s camera performance is simply average. However, the main 64 MP wide-angle camera is capable of turning in, decent shots provided you’re in a well-lit environment. Apart from the aforementioned camera, the phone has an 8 MP ultrawide, and 2 MP macro sensor camera on the rear.

The 20 MP wide-angle camera handles selfies duties. It has all the usual camera features like LED flash, HDR, and panorama. Interestingly, Poco X4 GT can record videos up to 4K@30fps, which isn’t typical for phones of this budget. Speaking of budget, the device comes in at a starting price of about €300, which approximately converts to $312. It comes in two RAM/ROM combinations, which are 8 GB/128 GB and 8 GB/256 GB. SD card isn’t supported by this phone, but it has room for two Nano-SIM cards. Furthermore, the device can support connections from 2G to 5G.

Display quality is an area where the phone lets you down in a major way. Don’t get us wrong, the display quality is good, but compared to the competition, it is a huge downgrade. At a price where you mostly see phones with AMOLED and OLED screens, this one has a 6.6-inch FHD+ IPS LCD screen. However, the phone has a 144 Hz refresh rate, which is a rarity at this price. The phone has a screen-to-body ratio of 85.1% and a PPI density of 407, both of which are impressive. Poco X4 GT can go up to 650 nits of brightness, which does the job even though it might seem underwhelming on paper.

Additionally, it supports HDR10 and Dolby Vision which only contributes to a pleasant multimedia experience. In the sound department, the phone not only has hi-resolution audio and stereo speakers but also a headphone jack. Connectivity options include GPS, Bluetooth 5.3, dual-band Wi-Fi, Hotspot, USB Type-C 2.0, and USB On-The-Go. It also has an infrared port, as you would expect from a Poco branded device. Poco X4 GT is well-built and looks elegant.

It has a plastic back and frame, with a Corning Gorilla Glass 5 protected glass front, which is a plus. What’s also a plus, is that the phone is comfortable to hold thanks to the slightly curved back panel. The gadget weighs 200 g and measures 6.44 by 2.93 by 0.35 inches. It comes in three color options, Black, Blue, and Silver. The power button doubles up as a fingerprint sensor. Other sensors include accelerometer, proximity, gyro, compass, and color spectrum. 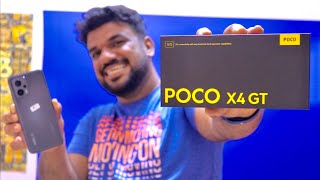 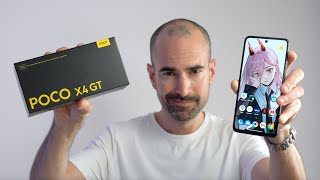