Poco X4 Pro 5G’s biggest strengths are its battery life, camera performance, and display quality. If you are looking for a phone that does well in the aforementioned areas, you should consider this one. It has a brilliant battery life, as it should last you around one and a half days on average use. If you are a light user, you could easily get two days of use out of it. Now, if you set the phone’s screen refresh rate from 120 Hz to 60 Hz, the battery life should be even better. It has a 5000 mAh Li-Po non-removable battery that supports 67W fast charging.

The phone can go from 0 to 100% in 41 minutes, which isn’t record-shattering but is impressive nonetheless. The device’s primary camera performance is superb. It has a 108 MP wide-angle, 8 MP ultrawide, and 2 MP macro sensor camera on the back. The Poco X4 Pro 5G also has a 16 MP wide-angle camera for selfies and video communications. It has all the usual camera features and can record videos in 1080p@30fps. The phone’s display quality and multimedia experience are great as well. It has a 6.67-inch FHD+ AMOLED screen with a refresh rate of 120Hz, as previously mentioned. The screen is protected by Corning Gorilla Glass 5. Its screen-to-body ratio and PPI density are 86% and 395 respectively.

The device can go up to 1200 nits of brightness so that you face zero issues while using it outdoors. The gadget not only has stereo speakers and high-resolution audio, but also a 3.5 mm headphone jack. What’s also nice to see is that the device has IP53 certification for dust and splash resistance. The phone has a great look, and it comes in Laser Black, Laser Blue, and Poco Yellow. However, the device does fall on the heavier side at 205 grams. Coming to the dimensions, the Poco X4 Pro 5G measures 6.46 by 3.00 by 0.32 inches. In the sensors department, the phone has a side-mounted fingerprint sensor, accelerometer, gyro, proximity, and compass.

For communication, the phone has dual-band Wi-Fi, Hotspot, Bluetooth 5.1, GPS, USB Type-C 2.0, and USB On-The-Go. It not only has NFC but FM Radio and Infrared Port as well, which is often absent in mid-range phones. The Qualcomm SM6375 Snapdragon 695 5G processor delivers decent overall performance. Still, it can’t be denied that you can get better-performing phones at similar prices. The Poco X4 Pro 5G’s gaming requirements are handled by the Adreno 619 GPU. On the software side of things, the Poco X4 Pro 5G runs Android 11 out-of-the-box with MIUI 13. 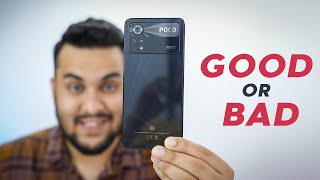 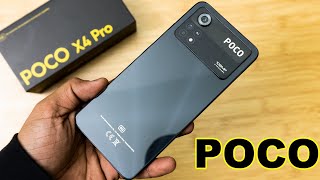