To our surprise, and because we’re used to mice from Razer being slightly overpriced, this isn’t the case here. Razer Naga Hex V2 specs not only have the maximum sensitivity but also 14 buttons total and aren’t that expensive at all. We’re thinking this could maybe be the best choice for you in a certain niche, and depending on what you’re looking for in mice. Razer DeathAdder Elite costs a bit more and has an abundance of many buttons, but it fits in your hands nicely, is smaller and of course, lightweight.

That’s not the ideal market for this one, however, but it’s not like it’s extremely heavy either – only about 135g. We all know how much MMOs, MMORPGs and MOBA games are widespread, and continue to be on the rise at the moment. Not only League of Legends, World of Warcraft, but Steam, Origin, Evolve, and other gaming communities keep bringing new titles for us to play. That’s where this mouse comes in if you have to use a lot of spells and abilities, and you need fast response, this is the mouse for you. It can literally mean the difference between life and death against your opponent, and winning a better rank or losing it all.

Razer Naga Hex V2 features 16000 DPI of sensitivity, however, that’s an insane amount to be used, allowing you to scale multiple full HD resolutions in a second. You should use between 2000 and 4000, depending on your habits and what feels right and gives results. We’re just saying the full capability is up to par with many other more expensive models like Asus ROG Spatha, Logitech G903, and even Razer’s own Ouroboros. In some cases, it has even more, but that’s not the end of it – instead of a thumb rest, it has a ring-finger rest.

It’s not only for looks, apparently, it was proven that it increases movement accuracy by giving the fourth finger more control instead of just fingertip. You just might have to test that out, and for an affordable price of Razer Naga Hex V2 – only $45. For that same price, you’ll be getting a cool-looking, matte black mouse, unlike the previous version of Naga which features a glossed skin. The mouse is big, we’ll not lie to you, and primarily meant for larger hands, but it’s not the end of the world, and we’ve quickly gotten accustomed to it.

The unique button-wheel concept was a part of the original mouse and is the biggest selling point and one of the best Razer Naga Hex V2 details when you take a good look. It adds 7 buttons to be programmed in whichever way you like, and to make it easier – they’re all numbered. For that, you’ll, of course, be using Razer’s Synapse application on your PC, allowing you full control. You can program all of the buttons, change RGB lighting to your favorite color. as well as create clever macros to give you an advantage in both gaming, as well as some everyday tasks or applications you use – but you’ll have to figure out that one on your own. 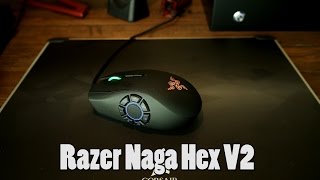 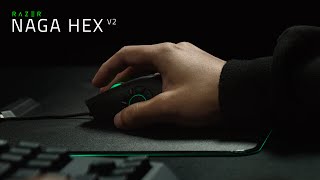