Razer Phone is a try and a success from launching a gamer smartphone. Razer stayed true to themselves, making it in Black color only, to make green stand out. Greed is probably your favorite color if you’re a Razer fan, and they have pleasantly surprised us this year. Razer Phone is still quite new, but already fighting for its place in the world of top-end phones. The design is reminiscent of Xperia XZ Premium, having the same square design to it. It isn’t that sleek looking, but at least they aren’t trying to be a copycat, and tend to the mainstream market.

Razer Phone specs are top of the game – a processor we already know and trust so well – Qualcomm MSM8998 Snapdragon 835. GPU is a yet another winner in users opinions – Adreno 540. Having heard that, Razer made sure you know you’re ready for each and every game you open. Forget long loading times, stuttering and freezing on those demanding games – the future is here! You might run out of 64GB of space you get by default. Don’t worry – Razer Phone has a microSD card slot with up to 2TB of memory to add. Let us be on the way to the discovery of a greatness that this smartphone is:

Razer Phone features that attract your eyes right away are certainly the cameras. It sports a 12MP dual camera on the back, making it easier to shoot a bigger group, landscape, or architecture shot. It only has 8MP on the front, which is just enough for all your selfie needs, without looking for insane quality. But where will you be seeing all those pictures you captured and games you played? On Razer Phone’s 5,7-inch IGZO IPS LCD capacitive touchscreen is the correct answer. The resolution is a strong point, at a 1440 x 2560 pixels resolution with a common 16:9 ratio.

That will ensure that the games you play are crystal clear but isn’t this a gaming smartphone? Indeed it is, and Razer Phone has ensured that all the games you play are immersive and responsive to the maximum. It brought the world first smartphone with 120Hz refresh rate, which is something professional PC gamers swear by. Not only that, but it has Dolby Atmos-tuned stereo speakers to make that sounds sweet and pleasant, whether you listen to music, or play a game. You’ve got the ability to go to settings and downscale the display resolution to Full HD (1080p), which improves battery life.

But Razer Phone battery has a capacity of 4000 mAh, which is one of the biggest on today’s market. That means you can go for a full day of comfortable usage, without needing to downplay the resolution or rush to the outlet. If something like this happens, Razer Phone has the Quick Charge 4.0 feature, allowing you to fill your battery in no time! We should mention that you get 8GB of RAM included, which proves that Razer indeed made a flagship gaming smartphone. We’ve waited until the end to speak about a potential dealbreaker. Razer Phone price of 699$ doesn’t bring you a 3,5mm headphone jack! It is true that 3,5mm is an analog thing of the past, but that might turn you off from buying, even though a 3,5mm to USB-C adapter is included in the package. 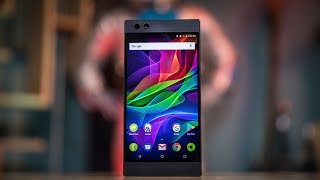 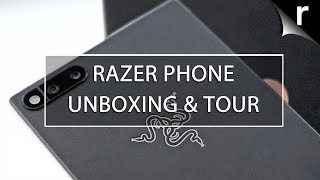