The Realme 8i, which is the cheapest smartphone in the Realme 8 series, was launched on the 14th of September 2021. The phone was first announced just five days prior on the 9th of September 2021. The device is powered by the MediaTek Helio G96 processor, which is based on the 12 nm technology. The phone has an eight-core processor and an AnTuTu benchmark score of 350391 points. The device runs Android 11 out-of-the-box with the user interface being Realme UI 2.0. Mali-G57 MC2 looks after the gaming and graphic aspects of this phone.

The smartphone has a 6.6 inches FHD+ screen with a screen resolution of 1080 x 2412 pixels and an aspect ratio of 20:9. It has an IPS LCD panel, and it can go up to 600 nits of brightness. The device has a PPI density of 400 and a screen-to-body ratio of 84.6%. Looking at the specs, it’s safe to say that you should have a good multimedia experience on this device. Moving to dimensions, the Realme 8i measures 6.46 inches in height, 2.97 inches in width, and 0.33 inches in thickness. The phone weighs 194 grams.

Coming to the build quality, the device has a glass front with a plastic body and plastic back. The device lacks Gorilla Glass protection which is a disadvantage of owning this device. In the sound segment, the device has a loudspeaker and a 3.5 mm headphone jack as well. As far as cameras are concerned, the phone has a triple camera set-up on the back, It has a 50 MP wide-angle camera by Samsung, a 2 MP macro sensor camera, and a 2 MP depth sensor camera. The rear camera has features like LED flash, HDR, and panorama. On the front, the phone has a 16 MP wide-angle camera.

Both the rear camera set-up and the front camera can record 1080p and 720p videos at 30fps. The Realme 8i should deliver a good camera performance overall and the front camera, in particular, does a great job. For connectivity, the phone has dual-band Wi-Fi, Hotspot, Bluetooth 5.1, and GPS. The device has USB Type-C 2.0, USB On-The-Go but lacks NFC and Radio. When it comes to sensors, the Realme 8i has a side-mounted fingerprint sensor, accelerometer, gyro, proximity, and compass. Moving to battery and charging aspects of the device, it has a 5000 mAh lithium-polymer non-removable battery. It supports 18W fast charging, and it should last you a day easily if you are an average user. 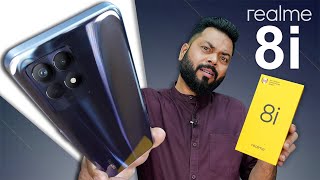 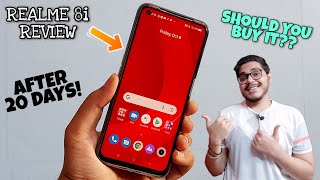