The Realme 8s 5G was first announced on the 9th of September 2021 and released just days later, on the 13th of September the same year. The phone is priced at ₹17,999 (approximately $242) for the 6 GB RAM and 128 GB ROM base variant. The other variant has 8 GB of RAM and 128 GB of internal storage and is priced at ₹19,999 (approximately $269). For color, there are two options, Universe Blue and Universe Purple. LPDDR4X and UFS 2.1 is the RAM and storage type used here. The phone has a dedicated card slot in case you need to expand its storage.

Apart from storage, Realme allows you to extend the phone’s RAM as well. If needed, you can use 5 GB of the phone’s storage to increase its RAM. This is an especially useful feature for gamers. Speaking of games, the Mali-G57 MC2 GPU handles the gaming performance on this device. The device doesn’t get too warm after gaming, which certainly can’t be said for every mid-range smartphone out there. MediaTek Dimensity 810 5G processor, based on the 6 nm fabrication process, handles the overall performance. Important to note — Realme 8s 5G scores 383409 points in the AnTuTu benchmark test.

As you might have guessed, the phone supports connectivity from 2G to 5G and dual nano-SIM cards. On the software side, the gadget runs Android 11, with Realme UI 2.0 on top. While the UI is easy to use, the phone isn’t free from bloatware. The phone has a 6.5-inch IPS LCD screen and a refresh rate of 90 Hz. It also has a screen-to-body ratio of 83.9% and a PPI (pixel per inch) density of 405. The multimedia experience is good, even if you are outdoors. The Realme 8s 5G has a 3.5 mm headphone jack and a loudspeaker. It would have been better if the company provided stereo speakers and an AMOLED screen.

Coming to dimensions, the phone measures 6.40, 2.94, and 0.35 inches in height, width, and thickness respectively. Similarly, the phone weighs 191 grams, which is neither too light nor too heavy by today’s standards. Coming to the camera, the phone has a triple setup on the back. It has a 64 MP wide-angle camera, a 2 MP macro sensor camera, and a 2 MP depth sensor camera. Features of these cameras include LED flash, HDR, and panorama. The Realme 8s 5G has a 16 MP wide-angle camera for selfies and video calls. Both the front and the rear camera setup can record videos in 1080p.

While the camera as a whole is decent, its low-light performance unquestionably isn’t. For communication, the device has USB Type-C 2.0, USB On-The-Go, GPS, Bluetooth 5.1, dual-band Wi-Fi, Wi-Fi Direct, and hotspot. The phone doesn’t have support for NFC. Battery backup is a highlight of this phone. For average users, the phone will easily last one and a half days after being fully charged. That’s because Realme 8s 5G has a 5000 mAh non-removable lithium-ion polymer battery that supports 33W fast charging. 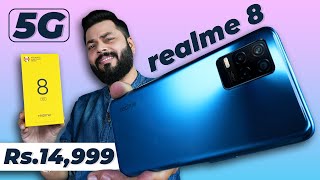 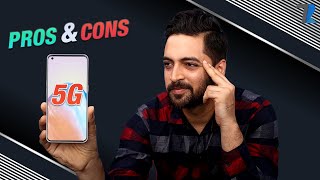