Realme 9 5G SE was first announced on the 10th of March 2022 and released four days later. It comes in at a starting price of about €240 which approximately converts to $263. For colors, you get to choose between Starry Glow and Azure Glow. The phone has a matte finish on the back, which makes it stand out from other phones from the manufacturer. Similarly, the device has two variants. Thus, if you are looking for a mid-range phone that delivers great performance, Realme 9 5G SE, which stands for Speed Edition, deserves your consideration.

Speaking of performance, it is handled by the Qualcomm SM7325 Snapdragon 778G 5G processor. The Adreno 642L GPU looks after the phone’s gaming requirements. In the AnTuTu benchmark test, the phone has a score of 541,000 points. As for the software, the phone runs Android 11 out-of-the-box with Realme UI 2.0 on top. The fact it operates on Android 11 is a major letdown. Also, while the device is fun to use, it isn’t free from bloatware. Both variants have 128 GB of internal storage, with 6 GB and 8 GB of RAM. The device has a dedicated card slot that has room for two Nano-SIM cards and an SD card.

Realme 9 5G SE is sturdy, but it isn’t a lightweight device. It’s worth mentioning it weighs 199 grams and measures 6.47 by 2.98 by 0.33 inches. The device delivers an acceptable multimedia experience, but it could have been better. It has a 6.6-inch FHD+ IPS LCD screen protected by Panda Glass. The phone has a screen-to-body ratio and a PPI (pixels per inch) density of 84.1% and 400 respectively. It can go up to 600 nits of brightness, and you should have no issue using it outdoors. One of the biggest upsides of owning this phone is its 144 Hz refresh rate, which isn’t very common at this price range.

The device has a loudspeaker and a 3.5 mm headphone jack, which is usually absent in mid-range devices. On the negative side, the device lacks stereo speakers. Realme 9 5G SE has all the usual sensors though. As for cameras, it has a 48 MP wide-angle, 2 MP macro, and depth sensor camera on the back. Its main camera performs well in good lighting conditions, but that’s not the case with the other two. The phone also has a 16 MP wide-angle camera for selfies and video calls. Its camera features include LED flash, HDR, and panorama.

The selfie camera can record videos in 1080p, while the rear camera setup can do so up to 4K. Moving to the battery, the phone has a 5000 mAh Li-Po removable battery that supports 30W fast charging. It should last you about one and a half days on average use. Even if you are a heavy user, the phone will still get you over the day. The device can go from 0 to 50% of charge in just 25 minutes, which is nice to see. For communication, the phone has dual-band Wi-Fi, Hotspot, Bluetooth 5.2, GPS, USB Type-C 2.0, and USB On-The-Go. NFC is absent on Realme 9 5G SE, which is surprising. 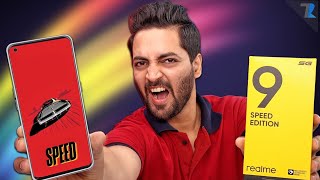 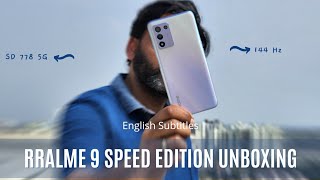