Realme is known for creating good value-for-money phones, and their Realme 9 Pro+ model is no different. The phone was first announced on the 16th of February 2022 and released five days later on the 21st. The device comes at a starting price of about €400 which approximately converts to $452 and has three variants. The base variant comes with 6 GB of RAM and 128 GB of internal storage. The other two variants have 8 GB of RAM with 128 GB and 256 GB of ROM, respectively. It doesn’t support an SD card, which is often the case with mid-range phones. Luckily, the device supports two Nano-SIM cards and connections from 2G to 5G.

The phone comes in Midnight Black, Aurora Green, and Sunrise Blue. The Blue one is special in the sense is that it changes its color to maroon when exposed to sunlight. Realme 9 Pro+ is not only slim but lightweight as well. For reference, it should be mentioned the device measures 6.31 by 2.89 by 0.31 inches and weighs 182 grams. The phone’s glass front is protected by Corning Gorilla Glass 5. Needless to say, the phone’s build quality is quite good. What makes the device considerably different from the competition is its heart rate monitoring feature.

One of the major advantages of owning this device is that it delivers an amazing multimedia experience. The phone has a 6.4-inch FHD+ Super AMOLED screen which can go up to 600 nits of brightness. Realme 9 Pro+ has a screen-to-body ratio of 84.2% and a PPI (pixels per inch) density of 411. The phone not only has stereo speakers and high-resolution audio but a 3.5 mm headphone jack as well. The performance delivered by the MediaTek Dimensity 920 5G is very good. The gaming performance, on the other hand, is handled by the Mali-G68 MC4 GPU.

In the AnTuTu benchmark test, the phone has a score of 416031 points. Moving to the software, the device runs the latest Android 12 with Realme UI 3.0 on top. The device isn’t free from bloatware, but you can uninstall most unnecessary pre-installed apps. Coming to the sensors, the phone has an accelerometer, gyro, proximity, compass, and an under-display fingerprint sensor. The phone’s camera performance is great. In fact, it performs brilliantly in low lighting conditions as well. On the rear, the Realme 9 Pro+ features a triple camera setup.

The phone has a 50 MP wide-angle, 8 MP ultrawide, and 2 MP macro-sensor camera. Apart from all the usual camera features, the device also has gyro-EIS (Electronic Image Stabilization). Realme 9 Pro+ also features a 16 MP wide-angle camera for selfies and video calls. When it comes to video recording, both the selfie camera and the rear-camera setup can record videos in 1080p. However, only the front camera setup can record videos in 4K. For communication, the phone has dual-band Wi-Fi, Hotspot, Bluetooth 5.2, USB Type-C 2.0, USB On-The-Go, and GPS.

While you won’t be able to listen to FM Radio on this phone, it does have NFC support. This is something that is expected from mid-range phones. The phone’s battery life is awesome as well. The device has a 4500 mAh lithium-polymer non-removable battery that supports 60W fast charging. If you are an average user, the device should last for close to one and a half days. What’s also nice to see is that the device can go from 0 to 100% of charge in just 44 minutes. Additionally, Realme 9 Pro+ supports USB Power Delivery 3.0. 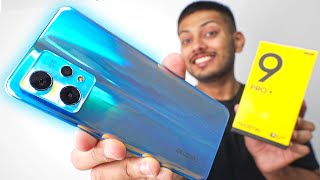 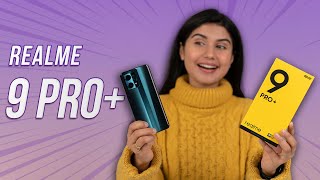