Realme 9 Pro is a good mid-range solution for those looking for a balanced phone. Like everything else, it does have some cons as well. The phone was first revealed on the 16th of February 2022 and released seven days later on the 23rd. It comes at a starting price of €330 which approximately converts to $360. The device delivers a good value for money, as you might expect from Realme. For color, you get to choose between Midnight Black, Aurora Green, and Sunrise Blue. The back panel is glossy, and it looks really stunning, especially when exposed to sunlight.

However, it also attracts fingerprints easily. Therefore, it is recommended that you use Realme 9 Pro with a case on. The phone has two variants. Both variants have 128 GB of internal storage, with 6 GB and 8 GB of RAM. While you can use an SD card, the device has a Hybrid slot. Therefore, the phone can handle up to two Nano-SIM cards and connections from 2G to 5G. Realme 9 Pro feels sturdy despite having a plastic body. Coming to the dimensions, it measures 6.47 by 2.98 by 0.33 inches and weighs 195 grams. The weight of the device falls on the lighter side, which is a plus.

The device has a 6.6-inch FHD+ IPS LCD screen with a resolution of 20:9 and a refresh rate of 120 Hz. Its screen-to-body ratio and PPI density are 84.4% and 400 respectively. The phone delivers a good multimedia experience. The presence of high-resolution audio and a 3.5 mm headphone undoubtedly contribute. At this price, Realme should have given stereo speakers. This is a major drawback of owning the Realme 9 Pro. Moving to the software, the device runs Android 12 with Realme UI 3.0 on top. The UI is smooth and fun to use. The device isn’t free from bloatware, but you can uninstall most unnecessary pre-installed apps.

The Qualcomm SM6375 Snapdragon 695 5G processor delivers a good overall performance. Its gaming requirements are handled by the Adreno 619 GPU. Realme 9 Pro has all the usual sensors. Its overall camera performance is average, though. The gadget features a triple camera setup on the back. It has a 64 MP wide-angle, 8 MP ultrawide, and 2 MP macro sensor camera. The phone’s camera features include LED flash, HDR, and panorama. For selfies and video communications, the phone has a 16 MP wide-angle camera. When it comes to video recording, both the front camera and the rear camera setup can do so in 1080p@30fps.

In the communication department, the device has a Wi-Fi dual-band, Hotspot, Bluetooth 5.1, USB Type-C 2.0, USB On-The-Go, and GPS. The Realme 9 Pro has NFC but lacks FM Radio, as is often the case with mid-range phones. Its battery life is also up to the mark. Speaking of which, if you are an average user, the phone should last you around one and a half days. The phone has a 5000 mAh lithium polymer non-removable battery that supports 33W fast charging. 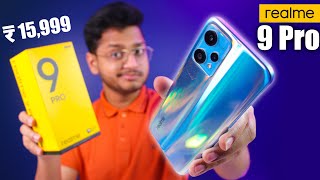 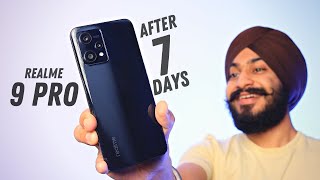