If you are not a fan of 5G, Realme 9 is a good option in the mid-range segment. However, it does have its share of issues, such as the performance not being up to the mark and the lack of stereo speakers. Other than that, it’s certainly an option worth considering. The phone comes at a starting price of about €200, which approximately converts to $217. It has two storage configurations. Both variants have 128 GB of internal storage but differ in terms of internal storage offered (6 GB / 8 GB). The RAM and storage type used here is LPDDR4X and UFS 2.1 respectively.

Realme 9 has a triple card slot that accepts two Nano-SIM cards and a memory card. The phone has a polycarbonate unibody build with a gradient finish, which is the same as most Realme phones. For color, you get to choose between Meteor Black, Sunburst Gold, and Stargaze White. It’s also worth mentioning here that the phone has a curved back, allowing you to have a better grip. The build quality, though, is expectedly good. The phone weighs in at 178 grams, making it among the lighter phones you can get today. Similarly, the phone measures 6.31, 2.89, and 0.31 inches in height, width, and thickness.

Realme 9’s greatest strength is its display quality. The phone has a 6.4-inch FHD+ Super AMOLED screen which is Corning Gorilla Glass 5 protected. It not only has a screen-to-body ratio and PPI density of 84.2% and 411 respectively, but it can also go up to 1000 nits of brightness. Therefore, you should have no issues using the phone outdoors, even on a bright day. While the device does have a 3.5 mm headphone jack, high-resolution audio, and a loudspeaker, it misses out on stereo speakers. The multimedia experience would have even been better had the phone included them.

Performance is one area where Realme 9 pales in comparison to its competitors. The Qualcomm SM6225 Snapdragon 680 4G processor delivers acceptable performance, but it’s surely not meant for intensive tasks. At this price, you can easily get phones that perform better. The Adreno 610 GPU is responsible for the phone’s overall gaming performance. The phone runs Android 12 out-of-the-box with Realme UI 3.0 on top. It’s nice to see Realme 9 running Android 12 since many phones still ship with Android 11 today.

As for the cameras, the phone has a decent overall performance, but the main camera works amazingly in ample lighting conditions. The phone has a 108 MP wide-angle camera with Dual Pixel phase detection autofocus, 8 MP ultrawide, and a 2 MP macro sensor camera on the back. It has a 16 MP wide-angle front camera for selfies and video communications. The device has all the usual camera features and when it comes to video recordings, it can do so in 1080p.

In the sensors department, the phone has an under-display fingerprint sensor in addition to an accelerometer, gyro, proximity, and compass. For communication, the phone has dual-band Wi-Fi, Hotspot, Bluetooth 5.1, GPS, USB Type-C 2.0, and USB On-The-Go. The phone lacks NFC, which is expected at this price. Its battery life is satisfactory, as it lasts around one and a half days on average use. It has a 5000 mAh lithium polymer non-removable battery. The device supports 33W fast charging, which is nice to see at this price. If the ads are to be believed, Realme 9 can go from 0 to 100% charge in just 75 minutes. 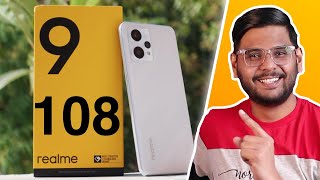 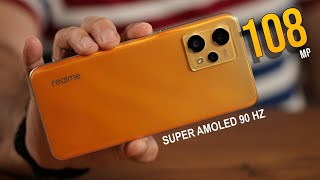