Realme 9i is the successor to Realme 8i, which is a popular budget mid-range smartphone. Much like its predecessor, Realme 9i is a great value-for-money smartphone and smart device in general. Speaking of value, the device comes at a starting price of about €170 which approximately converts to $192. The phone comes in Black and Blue and in three configurations. The first variant has 4 GB of RAM and 64 GB of ROM. The other two variants have 128 GB of ROM with 4 GB and 6 GB of RAM.

The device has a dedicated card slot, meaning you can use two Nano-SIM cards and an SD card simultaneously. As for connections, Realme 9i can support 2G, 3G, and 4G. While the phone does have a plastic frame and back, it doesn’t feel cheap. The phone is well-built, and it doesn’t attract a lot of fingerprints, which is nice to see. Coming to dimensions, it measures 6.47, 2.98, and 0.33 inches in height, width, and thickness respectively. The device weighs in at 190 grams, for which the company does deserve credit.

Realme 9i has a 6.6-inch FHD+ IPS LCD screen, which is one of its biggest advantages. The screen is Dragontrail Pro Glass protected instead of Corning Gorilla Glass. The device has a screen-to-body ratio of 84.2% and a PPI (pixels per inch) density of 400 ensuring a nice multimedia experience. The experience is further improved by high-resolution audio and stereo speakers. The phone’s overall performance should be pretty good as it uses the Qualcomm SM6225 Snapdragon 680 4G processor.

The Adreno 610 GPU handles the phone’s gaming performance, which is boosted by the presence of the 90 Hz screen refresh rate. In the AnTuTu benchmark test, the phone has a score of 234188 points. Moving to the software, the device runs Android 11 with Realme UI 2.0 on top. Speaking of which, the user interface is responsive and nice to look at. As far as the sensors are concerned, the device has a side-mounted fingerprint sensor, accelerometer, proximity, and compass. If you are a fan of taking pictures, the Realme 9i does a decent job in that department as well.

Realme 9i has a triple camera setup on the back. It has a 50 MP wide-angle, 2 MP macro, and 2 MP depth sensor camera. The phone has a 16 MP wide-angle camera on the front for selfies and video calls. The phone’s camera features include LED flash, HDR, and panorama. When it comes to video recording, both the front camera and the rear camera set-up can do so at 1080p@30fps. In the communication department, the device has a Wi-Fi dual-band, USB Type-C 2.0, Hotspot, Bluetooth 5.0, USB On-The-Go, and GPS.

It’s worth mentioning here that Realme 9i lacks both NFC and Radio, which is surprising. The device supports 33W fast charging. Therefore, the device can go from 0 to 100 percent of charge in 70 minutes, as per the ads. The device has a 5000 mAh lithium polymer non-removable battery. Post complete charge, the phone should last for around one and a half days. 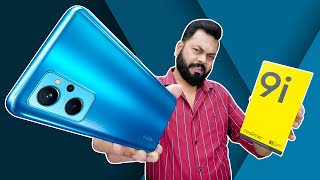 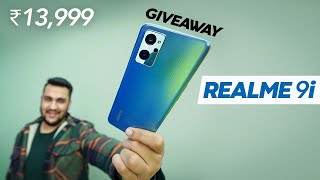