Realme C25 continues to be one of the best budget phones in 2021 even though it was first released on the 27th of March 2021. The phone comes at a starting price of about €140, which approximately converts to $158. The phone has two variants. Both variants have 4 GB of RAM but differ in terms of internal storage provided (64 GB or 128 GB). If you want to expand the storage, you can use an SD card as it has a triple card slot. The other two slots are reserved for Nano-SIM cards, and the device can support 2G, 3G, and 4G connections.

Similarly, you get two options in terms of color, which are Water Blue and Water Gray. The phone’s biggest highlight is its overall performance and battery backup. In the budget category, you mostly see phones with a 5000 mAh battery or less. In comparison, Realme C25 has a 6000 mAh lithium polymer non-removable battery that supports 18W fast charging. If you’re an average user, you should expect to get more than one and a half days of use out of it. In case you’re a light user, expect it to last for close to two days.

The phone supports the reverse charging feature, which is massively helpful in situations where you need to charge another device but don’t have access to a charger. However, there are downsides to having such a huge battery. The first downside is significant charging time, while the second downside is that it contributes to the weight of the device. The weight of the device is 209 grams, and it undoubtedly falls on the heavier end. Realme C25 has a plastic body, but it’s well-built. Speaking of measurements, the phone is 6.48 inches tall, 2.99 inches wide, and 0.38 inches thick.

Realme C25 boasts a large 6.5-inch HD+ IPS LCD screen with a screen aspect ratio of 20:9. Additionally, the phone has a screen-to-body ratio of 81.7%, which can go up to 480 nits of brightness. All this ensures that you get a decent multimedia experience even if you are outdoors. On that note, it should be mentioned that the device has a 3.5 mm headphone jack and loudspeaker. Moving to the software end, the device runs Android 11 with Realme UI 2.0 on top. The UI is smooth, but you do get a few unnecessary pre-installed apps.

As previously mentioned, the performance delivered by the Mediatek Helio G70 is awesome. Mali-G52 2EEMC2 GPU, on the other hand, looks after the device’s gaming requirements. The phone scored 211287 points in the AnTuTu benchmark test. As far as sensors are concerned, the phone has an accelerometer, proximity, compass, and a rear-mounted fingerprint sensor. For communication, the device has a Wi-Fi dual-band, Wi-Fi Direct, Hotspot, Bluetooth 5.0, and GPS. Realme C25 also has USB Type-C 2.0 and USB On-The-Go but lacks support for NFC.

One of the other major cons of Realme C25 is its average camera performance. The phone has a triple camera setup on the back. To be more precise, it sports a 48 MP wide-angle and a 2 MP macro and depth sensor camera. It has several camera features, too, including LED flash, HDR, and panorama. For selfies and video communications, the phone features an 8 MP wide-angle camera. As for video recording, both the selfie camera and the rear camera setup are capable of recording videos in 1080p at 30fps. 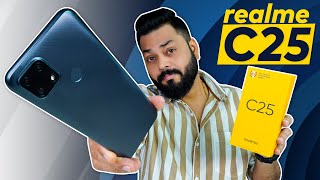 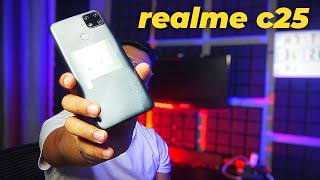