Realme C25Y is meant for those users that are mainly concerned with battery life and camera performance. The phone was first announced on the 16th of September 2021 and released two weeks later on the 30th of September 2021. Being a budget phone, one of its biggest strengths is its affordability. Speaking of which, the phone comes at a starting price of ₹10,999 which approximately converts to $144. The phone has three variants. The most economical variant has 4 GB of RAM and 64 GB of internal storage. The more premium variants have 128 GB of ROM with 4 GB and 6 GB of RAM.

The RAM and memory type used here is LPDDR4X and eMMC 5.1. While it would have been better if the phone had UFS storage, considering the price, it’s acceptable. Realme C25Y has a dedicated card slot, therefore you can use two Nano-SIM cards and an SD card simultaneously. The phone can support 2G, 3G, and 4G connections. For colors, there are two options, Glacier Blue, and Metal Gray. The phone is sturdy and doesn’t feel cheap by any means despite its plastic back and frame. It weighs 200 grams and measures 6.48 by 2.99 by 0.36 inches. While its weight is manageable, it isn’t exactly meant to be used with one hand.

Also, its display quality and multimedia experience could have been better. Realme C25Y has a 6.5-inch HD+ IPS LCD screen with an aspect ratio of 20:9. Its screen-to-body ratio and PPI density are 81.6% and 270 respectively. The phone has both a loudspeaker and a 3.5 mm headphone jack, which is nice to see. The Unisoc T610 processor delivers an all-right overall performance, considering the price. The Mali-G52 MP2 looks after the phone’s gaming performance. Moving to the software, Realme C25Y runs Android 11 with Realme UI R edition. The aforementioned UI is a lite version of the regular UI. Nevertheless, you will have to deal with bloatware on this phone.

On the subject of sensors, the phone has an accelerometer, proximity, compass, and a side-mounted fingerprint sensor. As previously mentioned, the phone’s camera performance is good. Realme C25Y has a triple camera setup on the back. It has a 50 MP wide-angle, 2 MP macro, and depth sensor camera. The device also has an 8 MP wide-angle camera on the front for selfies and video communications. The phone’s features include LED flash, HDR, and panorama. The front camera can record videos in 720p@30fps. On the other hand, the rear camera setup can do so in 1080p@30fps.

The phone supports Wi-Fi, Hotspot, Bluetooth 5.0, microUSB 2.0, and GPS. Considering the price, the lack of USB Type C isn’t a huge issue. However, this might make Realme C25Y feel outdated for some users. The battery backup is one department where the phone shines. On average use, the phone should last you around two days. It should be mentioned here that the phone has a 5000 mAh lithium polymer non-removable battery. Realme C25Y also supports 18W fast charging. 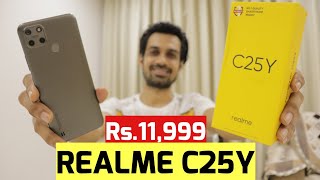 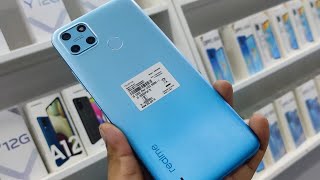