Realme C30 is a great phone if your main concerns are battery life, design, and performance. If it’s the camera performance you’re looking for, it’s better to look elsewhere. The phone should last you for close to 2 days if you’re an average user. In case you’re a light user, the results will naturally be even better. In fact, the company says that you can get up to 45.3 hours of standby time with the ultra-saving mode on. It has a 5000 mAh Li-Po non-removable battery. On the negative side, the phone doesn’t support fast charging. As a result, it will take multiple hours to go from 0% to 100% of charge.

The device lacks a USB Type C port and instead uses microUSB 2.0. Therefore, if you’re a fan of Type C port, this isn’t the one for you. Connectivity options include USB On-The-Go, FM Radio, GPS, Bluetooth 5.0, Wi-Fi, and Hotspot. Considering the budget, Realme C30 delivers a decent performance thanks to the Unisoc Tiger T612 chipset. The gaming performance, on the other hand, is looked after by the Mali-G57 GPU. On the software side, things are a little less than appealing. The phone runs Android 11 out of the box with Realme UI Go on top.

While running a lite version of the regular Realme UI is understandable, it doesn’t make sense for the phone to run an older version of Android. This stings, even more, when you consider the phone’s release date of the 28th of June 2022. To make matters worse, Bloatware is present on this phone. Realme phones are often remembered for their looks, and Realme C30 is no different. The phone’s plastic back panel has a stripe design which certainly feels memorable. Now, whether you would love it or hate it, is an entirely different matter, but at the very least, it does look unique. The device feels sturdy and has a plastic frame.

Compared to the rival phones, the phone is relatively lightweight at 182 grams. As for the dimensions, it measures 6.46 by 2.98 by 0.33 inches. It comes in two color options, namely, Lake Blue, and Bamboo Green. The phone lacks a fingerprint sensor, which might be a dealbreaker for some users. Other sensors include an accelerometer and a proximity sensor. Much like the performance, the phone’s display quality is good, all things considered. The device has a 6.5-inch HD+ IPS LCD screen with an aspect ratio of 20:9. It has a screen-to-body ratio of 82.2% and a PPI density of 270.

The phone can only go up to 400 nits of brightness, which will be an issue on super bright days. As for the audio, the phone has a loudspeaker and a headphone jack. The phone’s overall camera performance is average, while the selfie camera can take decent shots in ample lighting conditions. Realme C30 has an 8 MP and 5 MP wide-angle camera on the back and front respectively. While the rear camera can record videos up to 1080p@30fps, the front camera is limited to 720p@30fps.

The device has all the usual camera features including LED flash, HDR, and panorama. It comes in at a starting price of ₹7,499, which approximately converts to $95. Realme C30 comes in two RAM/ROM combinations, which are 2 GB/32 GB and 3 GB/32 GB. Thankfully, the device supports an SD card. Realme deserves praise for using UFS 2.2 storage instead of eMMC, which is more common in entry-level phones. Alongside an SD card, the phone can handle two Nano-SIM cards and connections up to 4G. 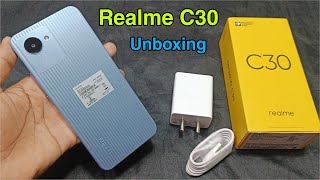 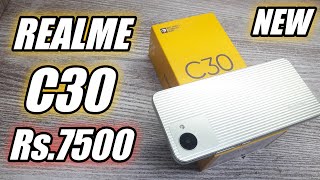