Realme C31 is easily one of the best budget phones you can buy today. Considering the price, it does well in the display and camera departments. The device was first announced on the 25th of March 2022 and released six days later on the 31st of March 2022. Being a budget phone, one of its biggest strengths is its affordability. Speaking of which, the phone comes at a starting price of about €100, which approximately converts to $108. The device has two variants. The base one has 3 GB of RAM with 32 GB of internal storage, while the premium boasts 4 GB of RAM with 64 GB of internal storage.

The RAM and memory type used here is LPDDR4X and UFS 2.2 respectively. At this price, most manufacturers often provide eMMC storage. Therefore, it’s nice to see UFS storage in Realme C31. What’s also impressive to see is that the device has a dedicated slot. This slot can house an SD and two Nano-SIM cards. As for the connections, it can support 2G, 3G, and 4G. For colors, you get to choose between Light Silver and Dark Green. The phone is well-built, despite having a plastic back and frame. It’s also worth mentioning here that the phone has a textured back panel.

This not only ensures that you have a solid grip on the phone but also that it doesn’t pick up fingerprints easily. Coming to the dimensions, Realme C31 measures 6.48 by 2.99 by 0.33 inches. Its weight of 197 grams is also manageable. The phone has a decent display and multimedia experience considering the price. It has a 6.5-inch HD+ IPS LCD screen with an aspect ratio of 20:9. It has a PPI density of 270 and an impressive screen-to-body ratio of 88.7%. In the audio department, the phone has a loudspeaker and a 3.5 mm headphone jack.

The Unisoc Tiger T612 processor delivers an acceptable performance. Its gaming requirements are handled by the Mali-G57 GPU. As for the software, the device runs Android 11 with Realme UI R Edition. Coming to cameras, their overall performance is good. The phone has a triple camera setup on the back. It has a 13 MP wide-angle, 2 MP macro, and 0.3 MP depth sensor camera. The phone’s camera features include LED Flash. Realme C31 also has a 5 MP camera for selfies and video communications. When it comes to video recordings, the rear camera setup can do so up to 1080p.

In the case of the selfie camera, video recording is limited to 720p. The phone’s sensors include an accelerometer, proximity, and a side-mounted fingerprint sensor. Its battery backup is quite good, but it could have been better, considering how budget phones often have great battery life. However, it would still get you through the day easily. The phone has a 5000 mAh Li-Po non-removable battery. The gadget only supports charges of 10W, so that means no fast charging. For communication, Realme C31 has Wi-Fi, Bluetooth, GPS, and microUSB 2.0. 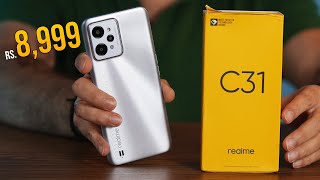 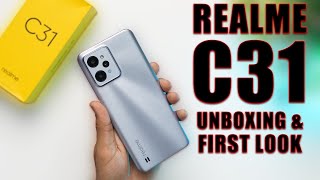