Realme C35 is a budget smartphone from Realme. It isn’t a great value-for-money smartphone but an affordable choice that looks nice and boasts good battery life. The phone was first announced on the 10th of February 2022 and released four days later. It comes at a starting price of ₹11,999 which roughly converts to $157. The phone has three variants. The two economical ones have 4 GB of RAM with 64 GB and 128 GB of internal storage. The most premium one features 6 GB of RAM and 64 GB of internal storage.

The RAM and memory type used here is LPDDR4X and UFS 2.2 respectively. If you need more storage, the phone has a dedicated card slot. The slot can accommodate an SD card and two Nano-SIM cards. In terms of connections, it supports 2G, 3G, and 4G. For colors, you get to choose between Glowing Black and Glowing Green. The phone does glow in the sunlight, as the name suggests. Realme C35 scores a perfect 10 in the looks department, as it looks stunning. It feels sturdy in hand despite having a plastic frame and back. Therefore, it’s safe to say that its build quality is quite good.

The gadget measures 6.47 by 2.98 by 0.32 inches. It also has an average weight of 189 grams. It delivers a decent multimedia experience, but it could have been better, for sure. The smartphone has a 6.6-inch FHD+ IPS LCD screen that has an aspect ratio of 20:9. It has a screen-to-body ratio of 84% and an impressive PPI density of 401. Additionally, it can go up to 600 nits of brightness, meaning you should be fine using it outdoors. The phone has a loudspeaker and a 3.5 mm headphone jack, which only contributes to the experience. Performance is one aspect where Realme C35 lags compared to competitors.

Realme C35 uses the Unisoc Tiger T616 processor, which delivers an acceptable overall performance. Nevertheless, there’s no denying that the competition offers better-performing phones at this price. The Mali-G57 MP1 GPU handles the phone’s gaming requirements. As for the software, the device runs Android 11 with Realme UI R Edition, which is a lite version of the Realme UI. Coming to sensors, the device has an accelerometer, gyro, proximity, compass, and a side-mounted fingerprint sensor. For communication, the phone has dual-band Wi-Fi, Hotspot, Bluetooth 5.0, and GPS. It also has USB Type-C 2.0, USB On-The-Go, and FM Radio. NFC is expectedly absent here.

Its battery life is awesome, as it should last you around one and a half days on average use. Realme C35 has a 5000 mAh Li-Po battery that supports 18W fast charging. When it comes to cameras, their overall performance is satisfactory. The device has a 50 MP wide-angle, 2 MP macro, and 0.3MP depth sensor camera. For selfies and video calls, Realme C35 features an 8 MP camera. The phone’s camera features include LED flash, HDR, panorama. As for video recording, the front camera can record videos in 720p, while the rear camera set-up can do so in 1080p. 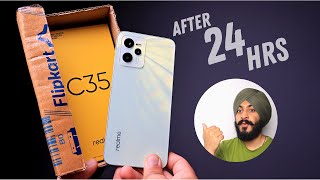 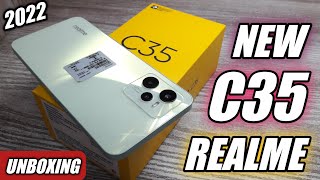