Realme GT Neo 3T comes in at a starting price of €450 (roughly $479), and it’s one of the best phones around that budget. With that said, it’s not meant for those whose main priority is camera performance. It has a 64 MP wide-angle, 8 MP ultrawide, and 2 MP macro sensor camera on the rear. The phone’s overall camera performance is mediocre, while the main is capable of producing decent images in ample lighting. The device struggles in low lighting conditions, which would have been fine if it was a budget phone. For a phone of this budget, it’s not. It has a 16 MP wide-angle camera up front for selfies and video calls.

The gadget’s camera features include LED flash, HDR, panorama, and gyro-EIS and can record videos up to 4K@60fps. This is where the cons of Realme GT Neo 3T end, as the phone performs well in every other department. Starting with the excellent battery life, the phone lasts around 1.5 days on average use. It has a 5000 mAh Li-Po non-removable battery with support for super quick 80W fast charging. While it doesn’t support wireless charging, the battery life and charging speed has more than made up for it. In the communication department, the device includes USB Type-C 2.0, NFC, GPS, Bluetooth 5.2, Hotspot, and Wi-Fi 6.

Like most Realme phones, it has a plastic back and frame. At this price, it would have been better if the phone had a glass back with an aluminum frame. However, it doesn’t feel cheap by any means and instead feels premium and well-built. The only thing that might be an issue to some is the checkered flag design on the phone’s back. This is more visible in the Drifting White and Dash Yellow variants. In case, you don’t like the design, you should go for the Shade Black variant. Realme GT Neo 3T measures 6.41 by 2.98 by 0.34 inches and has an average weight of 194.5 grams.

The device’s glass front is protected by Corning Gorilla Glass 5, which is a plus. Coming to sensors, the phone has an accelerometer, gyro, proximity, compass, and an under-display fingerprint sensor. Realme GT Neo 3T has a 6.62-inch FHD+ AMOLED screen with a refresh rate of 120 Hz. Its screen-to-body ratio and PPI density are 85.7% and 398 respectively. The gadget supports HDR10+ and the 1300 nits of peak brightness ensure perfect visibility outdoors. It has high-resolution audio and stereo speakers, as well. Looking at the specs, it’s safe to say that you will have an amazing time, consuming any kind of content on this phone.

The device runs Android 12 out-of-the-box with Realme UI 3.0 on top. Bloatware is an issue on this phone, although it can be uninstalled. Qualcomm Snapdragon 870 5G delivers super-smooth performance as you would expect from it. The gadget’s gaming performance is satisfactory as well, thanks to the Adreno 650 GPU and the incredibly rare 1000 Hz touch sampling rate. Realme GT Neo 3T comes in two RAM/ROM combinations, which are 8 GB/128 GB and 8 GB/256 GB. It doesn’t support an SD card. Therefore, make sure you choose the right combination considering your needs. It can handle two Nano-SIM cards and connections up to 5G. 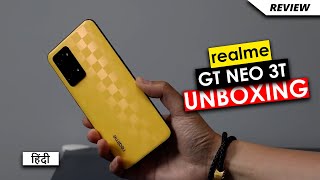 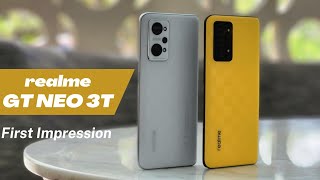