Realme GT2 is a high-end smartphone that is well worth the price. The manufacturer first informed the public about the device on January 4, 2020, and released it on the 8th. Speaking of value for money, the phone comes at a starting price of about €600 which is around $660. For color, there are four options, Paper White, Paper Green, Steel Black, and Titanium Blue. The Paper White and Green versions, in particular, look great. The phone has three variants, two with 8 GB of RAM with 128 GB and 256 GB of internal storage.

The more expensive variant has 12 GB of RAM and 256 GB of internal storage. The device doesn’t have a dedicated card slot, but that’s often the case with pricey phones. What the device does support are two Nano-SIM cards and connections from 2G to 5G. The phone measures 6.41 inches in height, 2.98 inches in width, and 0.34 inches in thickness. Similarly, Realme GT2 has a manageable weight of 199.8 grams. The phone has a 6.62-inch FHD+ AMOLED screen protected by Corning Gorilla Glass 5. It has a screen-to-body ratio of 85.7% and a PPI (pixels per inch) density of 398.

The device delivers a good multimedia experience. This is only improved by the presence of high-resolution audio and stereo speakers. The gadget can go up to 1300 nits of brightness, so you won’t struggle to use it outdoors. The device doesn’t have a 3.5 mm headphone jack, though. The Qualcomm SM8350 Snapdragon 888 5G processor delivers great overall performance, which is expected. The Adreno 660 GPU, on the other hand, controls the phone’s gaming experience. The 120 Hz screen refresh rate only adds to the experience. Coming to the software, Realme GT2 runs Android 12 with Realme UI 3.0 on top. The device has an under-display fingerprint sensor, accelerometer, gyro, proximity, compass, and color spectrum.

In the communication department, the phone has dual-band Wi-Fi, Wi-Fi Direct, Hotspot, Bluetooth 5.2, USB Type-C 2.0, USB On-The-Go, and GPS. While you won’t be able to listen to FM Radio on this phone, it does have support for NFC. As for the battery, its performance is awesome. The phone has a 5000 mAh lithium polymer non-removable battery that supports 65W fast charging. With moderate use, it should easily last you around one and a half days. If the ads are to be believed, the phone can go from 0 to 100% of charge in just 33 minutes. This is certainly an advantage of owning Realme GT2. 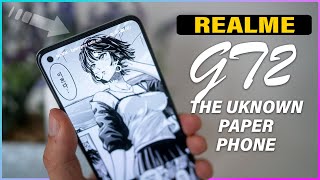 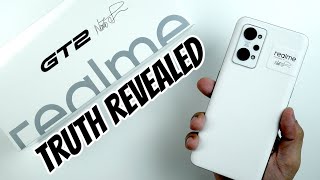