Budget phones often ask you to compromise a lot. Realme Narzo 30A is one of those inexpensive phones that don’t. While this phone was first launched on the 5th of March 2021, it’s still among the best budget phones in 2022. It comes at an aggressive starting price of ₹8,999 which approximately converts to $117. Naturally, affordability is one of the greatest strengths. The phone comes in two variants. The base variant has 3 GB of RAM with 32 GB of internal storage. The premium variant has 4 GB of RAM and 64 GB of ROM. The storage type used here is eMMC 5.1 while the RAM type is LPDDR4X.

It would have surely been nice to see a UFS storage here, but considering the price, it’s fine. The device has a dedicated card slot that can accept a memory card besides two Nano-SIM cards. 4G connections are supported on this device, as are the 3G and 2G ones. For colors, you get to choose between Laser Black and Laser Blue. Realme Narzo 30A’s design is a bit different from other Realme phones. On the back, most of the phone features a diagonal line design, while the rest of the area is plain. The phone is sturdy and isn’t the kind to slip easily. It measures 6.48 inches in height, 2.99 inches in width, and 0.39 inches in thickness.

The phone does feel a bit heavy at 205 grams, but that’s expected considering the size of the battery. On the topic, it should be mentioned that the phone has a massive 6000 mAh Li-Po non-removable battery. The phone’s battery life is superb, as it should last you for around two days on average use. It not only supports 18W fast charging but also, reverse charging. At this price, the presence of both these features is certainly worth appreciating. Realme Narzo 30A has a 6.5-inch HD+ IPS LCD screen with an aspect ratio of 20:9. Its screen-to-body ratio and PPI density are 81.7% and 270 respectively.

Both the display quality and multimedia experience are fine considering the price. The phone does have a 3.5 mm headphone jack and a loudspeaker. However, using the phone outdoors isn’t a completely pleasing experience due to the low brightness levels. The MediaTek Helio G85 processor delivers a satisfactory overall performance. Its gaming requirements are handled by the Mali-G52 MC2 GPU. Moving to the software, the device runs Android 10 with Realme UI on top. The phone does have bloatware, but you can uninstall most unnecessary pre-installed applications.

When it comes to sensors, the phone has an accelerometer, proximity, compass, and a rear-mounted fingerprint sensor. Coming to cameras, the rear ones deliver a sub-par performance, while the selfie camera turns in a good one. On the back, Realme Narzo 30A has a 13MP wide-angle and 2 MP depth sensor camera. On the front, the device has an 8 MP wide-angle camera for selfies and video communications. It can record videos in 1080p and has all the usual camera features. The phone supports dual-band Wi-Fi, Wi-Fi Direct, Hotspot, Bluetooth 5.0, GPS, USB Type-C 2.0, and USB On-The-Go. Like almost every budget phone, Realme Narzo 30A has FM Radio but lacks NFC. 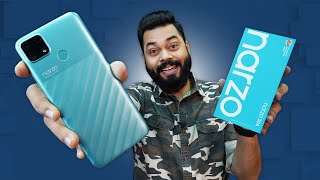 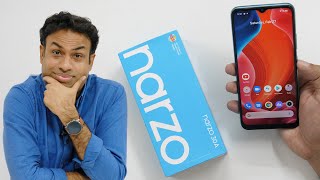