Realme’s Narzo series is known for their value for money phones, and Realme Narzo 50 5G is yet another decent addition. The phone’s highlights include its battery life and design. On the negative side, the camera performance is simply average. Speaking of cameras, the phone has a 48 MP wide-angle camera and a 2 MP depth sensor camera on the rear. The inclusion of the latter barely adds anything to the experience. For selfies, it has an 8 wide-angle camera. It has all the usual camera features and can record videos in 1080p@30fps, like most phones in the segment.

What’s also on the cons side, is the phone’s display quality. Realme Narzo 50 5G has a 6.6-inch FHD+ IPS LCD screen with a refresh rate of 90 Hz. Both the screen-to-body ratio of 85.3% and PPI density of 400 are impressive. While the display quality is decent, it would have been better if the phone had an AMOLED screen. Getting a phone with an AMOLED screen isn’t a guarantee at this price, but since this is a Narzo phone, expectations do get naturally high. On paper, the device can go up to 600 nits of brightness, but in reality, you might face issues outdoors on a very sunny day.

In the sound department, the phone not only has a headphone jack but also stereo speakers. Realme Narzo 50 5G delivers smooth performance in the day-to-day tasks, thanks to the MediaTek Dimensity 810 chipset. However, it’s surely not meant for gaming. Therefore, if you are a gamer, it’s better to look elsewhere. It’s worth mentioning here that the phone’s gaming requirements are handled by the Mali-G57 MC2 GPU. Unlike many phones that still ship with Android 11, this one runs Android 12 out-of-the-box with Realme UI 3.0 on top.

While the UI is fun to interact with, Bloatware remains an issue and certainly ruins the experience by a bit. Coming to design, the phone has a glass front with a plastic back and frame. The back panel has a textured design, but it’s only visible when you look at it closely. However, the back panel does pick up fingerprints and smudges easily. The gadget is not only well-built but is also slim, and easy to hold thanks to its curved edges. For reference, the phone measures 6.45 by 2.96 by 0.32 inches and measures 190 grams. In terms of colors, the options are Hyper Blue and Hyper Black. The former is the more attractive of the two.

In the communication department, the phone has USB Type-C 2.0, GPS, Bluetooth 5.3, dual-band Wi-Fi, and a Hotspot. Multiple phones in the segment deliver a battery life of somewhere between 1 and 1.5 days on average use, which is awesome. Realme Narzo 50 5G, thankfully, falls in the same category. The gadget has a 5000 mAh Li-Po non-removable battery with support for 33W fast charging. The phone comes in at a starting price of ₹15,999 which approximately converts to $206. It comes in three RAM/ROM combinations which are 4 GB / 64 GB, 4 GB / 128 GB, and 6 GB / 128 GB.

While the phone does support an SD card, it has a Hybrid SIM slot. Realme mostly goes for a dedicated card slot in the segment. Therefore, the inclusion of this type of SIM slot is surprising, to say the least. Realme Narzo 50 5G can either handle two Nano-SIM cards or an SD card with a Nano-SIM card. Speaking of connections, the phone can support connections up to 5G, which is one of the best parts of owning this phone. 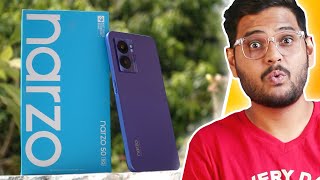 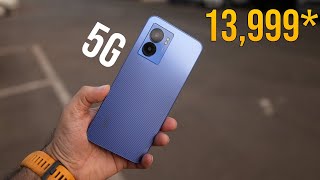