Realme Narzo 50 Pro is one of the best phones in its segment, and it does well in every department. One of the rare cons of owning this phone is that it comes with bloatware. Apart from that, Realme UI 3.0 is fun to interact with. The phone also runs Android 12 out-of-the-box, which is a plus. The MediaTek Dimensity 920 chipset expectedly delivers decent overall performance. The same is the case with the gaming performance delivered by the Mali-G68 MC4 GPU if you can manage your expectations. Design is a department where Realme never fails to make a good impression.

Thankfully, the device isn’t any different in this respect. The phone has a glass front with a plastic frame and the build quality is good. In addition, the rear plastic back panel has a textured finish, which isn’t that common in Realme devices. Naturally, it does a good job of resisting fingerprints and smudges. Realme Narzo 50 Pro isn’t just slim but also lightweight than most of its peers. For reference, the device measures 6.31 by 2.89 by 0.31 inches and weighs 181 grams. For color, the options are Hyper Blue and Hyper Black. The phone’s display quality is awesome.

It has a 6.4-inch FHD+ Super AMOLED screen with a refresh rate of 90 Hz. While the screen-to-body ratio of 84.2% is decent, the PPI density of 411 is even better. At the very least, you will have a pleasant time watching movies and videos on Realme Narzo 50 Pro. The presence of a headphone jack, high-resolution audio, and stereo speakers only adds to the experience. Looking at the specs and segment, it’s safe to say that Realme hasn’t done any cost-cutting in this department. Coming to cameras, the phone’s performance is decent as well.

The performance of the ultrawide camera, selfie camera, and performance in low light is especially worth appreciating. Realme Narzo 50 Pro has a 48 MP wide-angle, 8 MP ultrawide, and 2 MP macro sensor camera on the back. For selfies, it features a 16 MP wide-angle camera on the front. Camera features include LED flash, HDR, and panorama. Video recording is limited to 1080p@30fps. At this price, the phone should have supported 4K video recording, especially since it is a mid-range Narzo phone. Speaking of price, the phone comes in at a starting price of ₹21,999 which approximately converts to $283.

The device has two variants and both variants have 128 GB of internal storage with 6 GB and 8 GB of RAM. It would have been better if the phone’s premium variant had 256 GB of ROM since the phone doesn’t support an SD card. What it does support is two Nano-SIM cards and connections up to 5G. With the phone lasting anywhere between one and one and a half days on average use, its battery life is impressive. The gadget has a 5000 mAh Li-Po non-removable battery with support for 33W fast charging. For communication, it supports USB Type-C 2.0, GPS, Bluetooth 5.2, dual-band Wi-Fi, and a hotspot. The lack of NFC, at this price, is shocking. On a positive note, Realme Narzo 50 Pro has all the usual sensors. 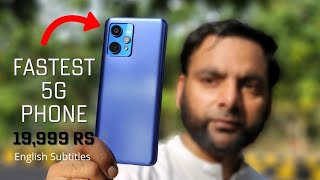 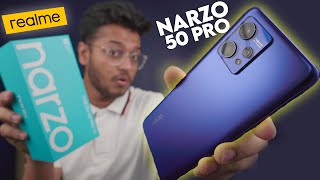